That time I had surgery... Awake

I had this tumor thing.
I had it for at least two years- and it was creeping me the fuck out.
I met with the surgeon and he explained the procedure and tried to talk me out of getting it removed.  But if you have ever had something in your body that didn't belong, you know how much you want that thing out! It was thought to be a lipoma, a fatty tumor, which is unlikely to be malignant.
So I was told that the whole procedure would take 10-15 minutes, maybe longer if it was behind the muscle (which he thought it was) and that I would be awake...  Um.. I'm sorry, what?!
The day of the surgery, I was so scared- I cried the whole way there. I'm a friggen baby folks, what can I say?
I got into the procedure room almost an hour after I was scheduled- (guess the person before me was busy freaking the fuck out too) a big thank you to that poor nurse who had to deal with my whiny ass. She had me take my shirt off in exchange for a johnny, and lay on the table. This would have been the part where I expected to be given some kind of drug to calm me down... or at least get me high. But, unfortunately I wasn't so lucky.
The surgeon came in, explained that I was going to get a couple injections of lidocaine (which they said was the worst part... they lied) and then we would get started..
At this point, I was crying and shaking my leg so hard I was practically vibrating off the damn table and I really started to grill this dude... Like, hello?? Where the fuck are my drugs?!
He did the first two injections, which didn't feel like anything- especially compared to getting your feet tattooed. This dude already had the scalpel in hand 30 seconds later- and I panicked..

I can still feel that!
His response? "Oh you're still going to feel everything, just not the pain."
WHAT, NO... You never fucking told me that..  I can really still feel that..
"Ok, ok.. I'll give you a little more lidocaine."

My freaking out escalated- so much so that the surgeon didn't want to preform the surgery at all. He said I was freaking out too much and that we should reschedule so he could put me under. He worried that he would start cutting into me and I wouldn't make it through, which would have been really bad.

I thought about it for a few and convinced myself that I had to stop being a baby and get this over with..(especially since I had just paid $250 to be there) and then proceeded to convince this dude to cut this shit out.. NOW.  It took a couple minutes to get him to agree to do it- but I convinced him. 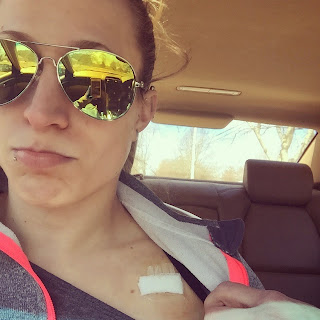 A scalpel cutting into your flesh sounds like ripping paper in your head. You can not only hear this sound with your ears, you can feel it with your whole body. Every clink of a clamp, or cut of a scissor... I could feel everything that was going on. There was no pain exactly... but I could feel his fingers, the pressure, the prodding..
"I have good news... Your friend is gone!"
And just when I thought it was over... He shoved his fingers in there to "make sure it was all out" and started to stitch me up.
I gagged, "This is fucking disgusting!" which actually made him giggle. When he finished he showed me before bandaging it and also showed me my "friend".
Ew.
By the way, It took 25 minutes- not 10..
I left there completely exhausted... and had a giant ice cream sundae- Totally deserved.
I got to take the bandage off 3 days later.. 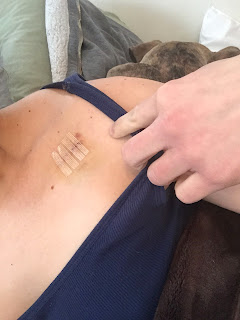 And a day after that, the butterfly stitches. The bruising stayed for a couple weeks.. 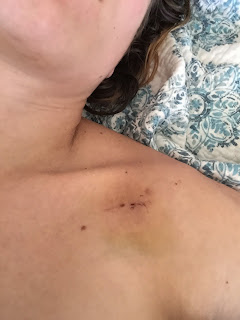 And finally.. the finished product,  Friend-free. The area is still sensitive and I gag if it gets touched.. I think I just have PTSD, lol. 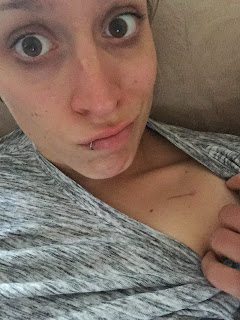 It turned out to be benign. However, chances of lipomas returning, or popping up in other locations are extremely high.
In all seriousness- I owe Dr. Jones a lot of props. He was pretty great through everything and handled me pretty well. I will totally go back to him if I need to... though next time, I'm taking drugs. haha.