Christmas is my favorite time of the year.. I know it’s cliche, but I absolutely love the month of December. Cheesy Christmas movies and music, baking cookies (Which I haven’t actually gotten to just yet) decorating the tree with millions of lights 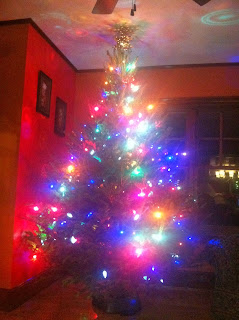 And wrapping my mutts up in lights 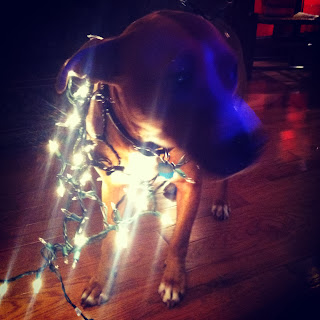 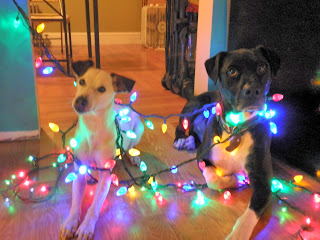 This year is quite a bit different. The holidays bring up a lot of emotions and memories. I found myself so confused. On the one hand, I wanted to boycott the holiday completely. But on the other hand, it’s time to start making some new memories and traditions as my life moves forward-.

So, this year.. G and I headed to New York to see the tree lighting at Rockefeller Center!
The plan was to leave early so we could drive to New Haven, park the car and take the commuter rail into the city. BUT, I’m kind of a slacker sometimes and it took a little longer for me to wake up and get ready. Plus we had to make a Starbucks coffee stop 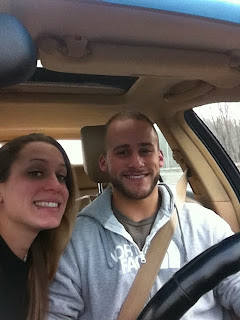 The train ride was a couple hours long, but it went by pretty quickly. We arrived at 11:20- Grand Central Station is beautiful- I only wish the pictures I have of the ceiling did it any justice. 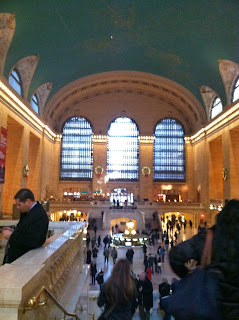 Straight from the station we started walking… It was such a warm and sunny day!
The first tree of the trip- which I personally think is the prettiest… it actually has ornaments! 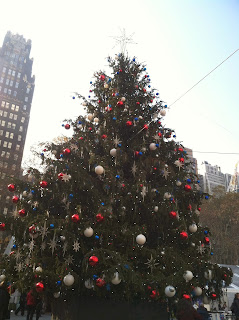 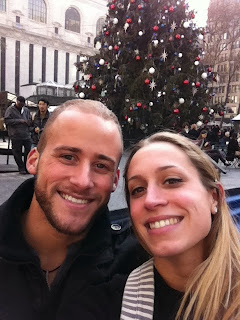 We walked through Times Square and up and down Fifth Avenue, stumbling onto some fun stuff. Like the ball thats dropped on New Years Eve! This thing is HUGE… I made sure to rub my hands all over that thing for good luck- I could use it… Just saying 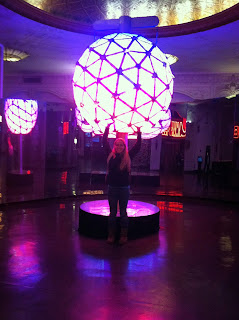 We wrote wishes down on confetti- which will be part of the confetti on New Years, too!
Finally we made our way to the Rockefeller Center tree.. but first, Radio City. 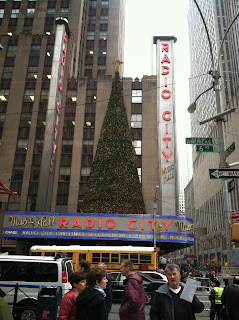 FINALLY the tree! Up close and personal.. Unlit, but still awesome! 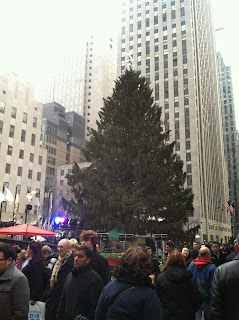 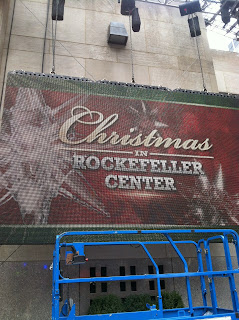 Then it was time for a little lunch.. We really wanted pizza, and after half an hour looking for a pizza parlor, we found a pizza truck- we are such locals.. 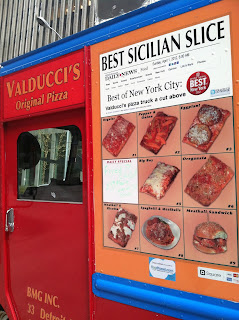 I went with the special slice of the day.. Broccoli Rabe 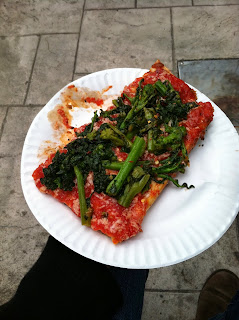 SOOOO good!
Then it was time for more sight seeing.. 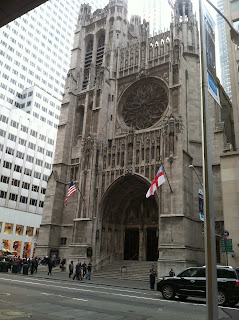 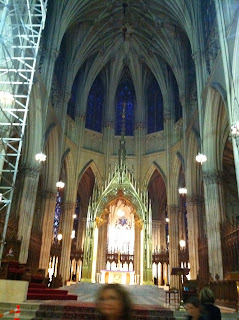 The tree lighting was scheduled for 7-9, but around 4 they started shutting down the streets and people were already waiting.. There was no way we were going to stand in one spot for 5 hours.. so we settled for seeing it unlit.. (We do have plans to see it after Christmas though!) 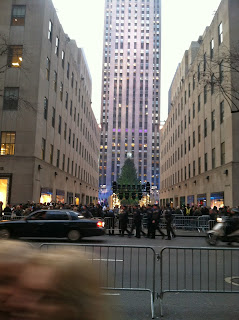 We walked over to Jekyll and Hyde for dinner.. This place was fun! There were a ton of random things on the walls and in every corner.. 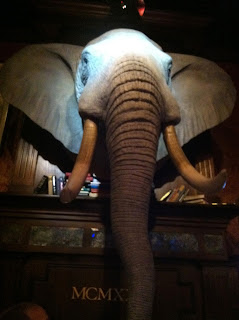 All the servers were playing a part.. like a play.. and the food was pretty good too. 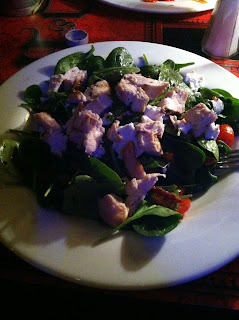 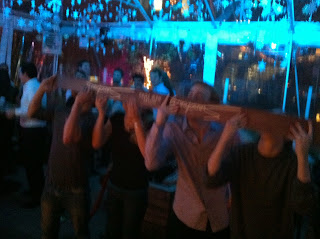 Off of a ski..  We were true New Yorkers as we hung out at a roof-top bar and watched the tree lighting on Tv.
While walking back to Grand Central, we ran into this little guy 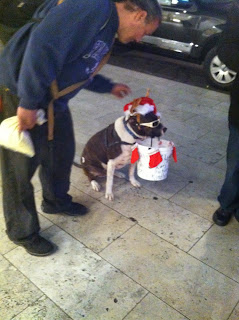 Coolest pup ever..  I’m pretty sure he was the richest dog in New York!
We hopped on the train and I then proceeded to fall asleep on the ride home.. 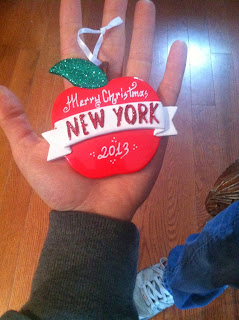 I think we have a great new tradition ;)
Posted by Crystal Coco at 6:54 AM No comments: 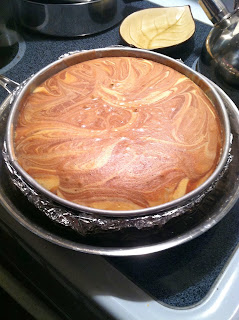 Our contribution to Thanksgiving 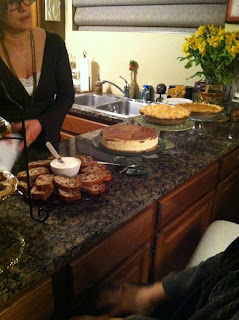 We were lucky enough to get the recipe from an actual pastry chef where G works.. And lets just say that it was worth the 3 hours it took to bake it. 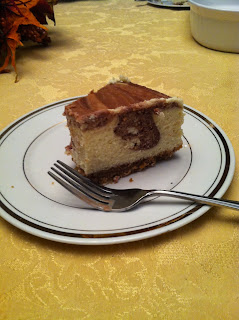 I’ve haven’t been around because I moved, again. This time Tuna and G helped and I was all moved out of one place and all moved into the next place (unpacked and everything) in 2 days flat. 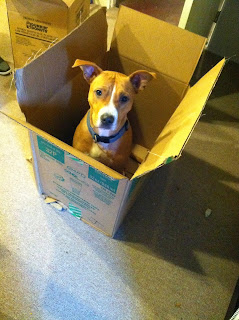 The new place it literally 3 blocks away from the old place.. but this time I have windows. Lots and lots of windows-  5 to be exact! 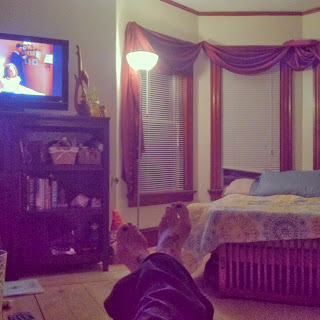 Tuna and I have adjusted nicely

Posted by Crystal Coco at 5:44 AM No comments: