Sitting at the dining room table eating yogurt with strawberries and bananas and a spoon full of almond butter of course…. looking around at my home.. Today is moving day- for me anyway. As I scan around the rooms, I can't help but be emotional as I think of what has gone into each and every one of them. My beautiful kitchen- from the hardwood floors, to the granite counter tops.. the pictures on the wall, the glass in the cabinets and the colors on the wall. I designed each and every part of it. It was my dream kitchen. And in it, with the amazing stove that my dad bought for me….  the thousands of meals I have prepared here.. the Christmas eve family gatherings that we hosted- I loved each and every moment of it all. Cooking was something that I absolutely LOVED. Something that my father taught me so long ago when I was just a little kid "helping" him make gnocchi from scratch (when really all I did at the time was put them on a floured plate in circles- my OCD started so young lol) I had to only be 3 or 4 years old- but it is something I will never forget… my dad gave me one of the greatest gifts- the love of cooking- there was never much of a recipe… He just would say, "You just feel it" **Insert hand gesture here** And that is how I learned and developed a passion for cooking and eating.. I am Italian after all. The kitchen in the "heart" of the home,  I'm going to miss my kitchen most of all.  It seems to silly to cry over a kitchen, but with the death of my relationship came the death my "heart". I'm not just leaving behind an amazing kitchen and that homey feeling… my passion and love for cooking has been murdered.

And this is where my anger comes in. The thought of some stupid bitch coming into MY KITCHEN, into my home, into the rooms where I painstakingly choose colors for the walls and furniture… Where, if you look hard enough you can still find blood spatters on the walls from Hydro's tail (because no matter how many times i would follow after him with a magic eraser cleaning up after the boo boo that would never heal, there was always more) Yes.. this is when I get very angry. This is my house.. this is MY LIFE… you fucked your way into and it doesn't matter how sneaky and how hard you try, you will never live up to me. It's not because I think I'm better than you.. oh no.. it's because I know I'm better than you. You don't deserve to be the mat I wipe my feet off on before I step foot into my house.

So as I fill my tiny little car with my few belongings, take one last look at the life and the home I have to leave behind, I'm scared. I'm scared I'll never have what I'm looking for. I'm scared that I'll never love cooking again. I'm sad. Sad that all of the love and care I put into each and every moment of taking care of this house and my family was never really appreciated 100%. (And yes I realize that I am guilty of that too) I'm sad that when it comes right down to it… your worth is measured by the amount of money you make, by the material things you can afford and not by the person you've worked so hard to become. And as much as it feels impossible right in this moment.. I'm excited. I'm excited to not have one ounce of knowledge of the future.

Scenes from the work weekend- I worked 26 hours and didn’t even make minimum wage.. (I’m talking $4.50 an hour) I just want to cry- rough. Sunday I didn’t have a single table, but I did see my co-worker break a fillet knife in half 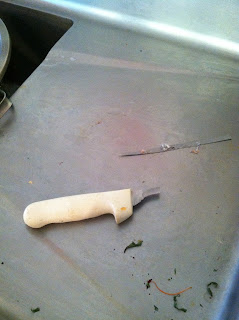 And the cook made me an awesome lunch 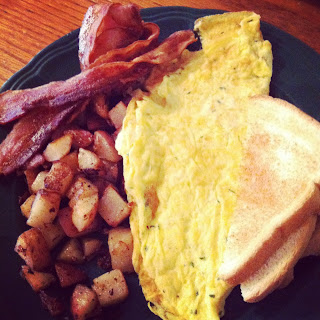 (I obviously didn’t eat the bread) Oh BACON how I love you!!

Monday, I was supposed to start training… but it was a LONG weekend… so bed seemed like a much better idea- and it was ;)  Eventually,  I got up and went out for breakfast. I totally didn’t know it was a holiday here in RI (VJ day) so it was packed and we had to wait 20 minutes to just sit down. So really it was more like an early lunch than breakfast- but again there was bacon there.. so it was all good. Hah.
The rest of the afternoon we just hung out. I had plans to meet up with James for dinner- we have been getting together once a week just to stay in touch- and we settled on Sushi 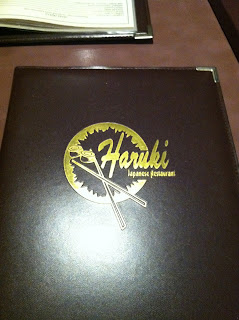 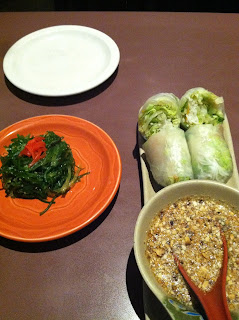 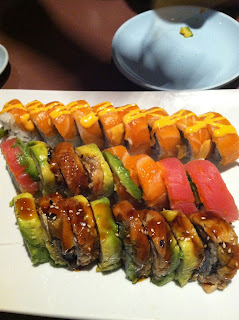 From top to bottom- Russ Roll, Rainbow Roll, Indiana Roll.
While it was good to hang out (we missed the last two weekends- we usually get breakfast) I realized we didn’t really have a whole lot to talk about. Weird. You’d think after 10 years of being in a relationship and being friends with someone… we would have, but mostly (to me anyway) it felt like there was a pink elephant in the room. And there is. There are a number of things that we just shouldn’t  and don't talk about- because one of us gets upset, then the other feeds off that, and well… then we fight.
That almost happened.
But before it escalated..
I left.
I just can’t do this to myself anymore… And I’m starting to realize that hanging out every week may just be a bad idea… at least for now.
So instead, there was Ben and Jerry’s, whipped cream and a movie- closing the night on a high note.

This morning (Tuesday) it was time to get on the ball with training. I actually got up, had coffee and started running just before 8am.. That is really a huge deal for me these days.. since honestly I’ve been staying in bed well past 9:30 lately.

We did 4 miles with a 9:25 average pace.
Afterwards I drove to the house to take care of the boys and make an amazing paleo feast! 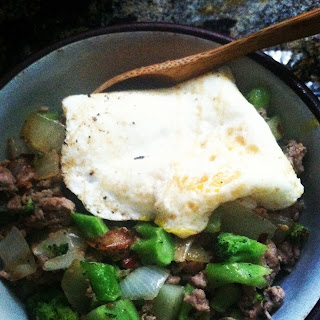 I snacked on a banana while I cooked too.
Ground Turkey, onion and broccoli- cooked in coconut oil with some spices.. topped with an over easy eggy. Hot sauce liberally applied before stuffing my face.

After breakfast and a shower, I went too my new place to slap on the second coat of paint. 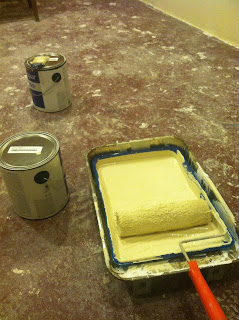 It only took me a just over an hour- not too bad. One more coat to go!
Paula and I met up soon afterwards for some coffee and errands- I might have stolen a chocolate from her.. but at least I got a nice message 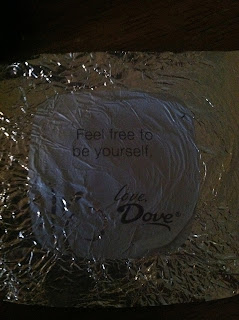 Thanks Dove.. I think I will

Posted by Crystal Coco at 1:18 PM No comments: 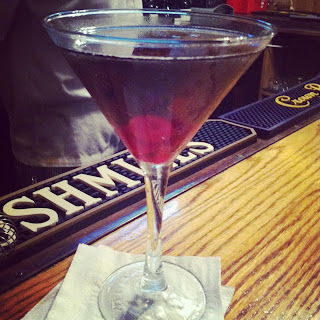 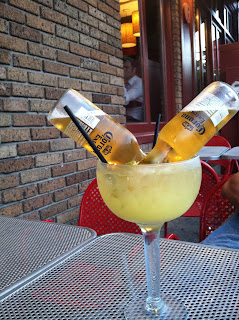 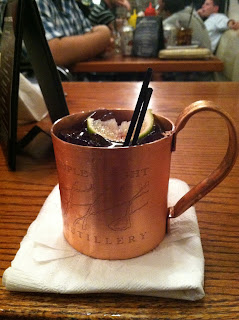 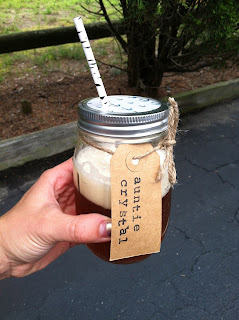 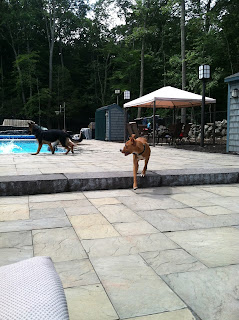 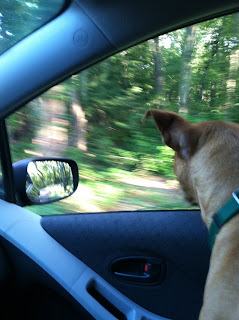 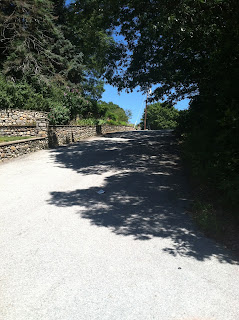 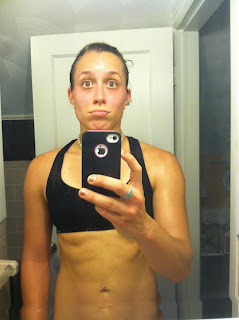 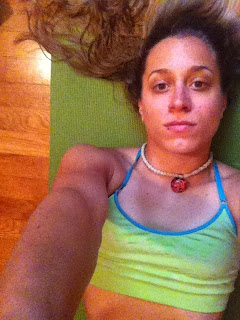 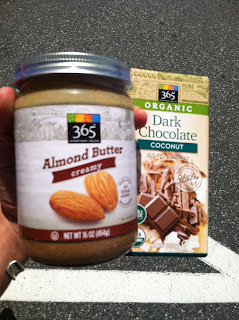 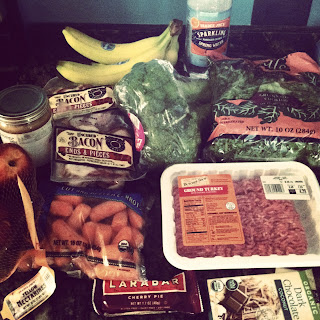 I even bought enough food for more than one meal!
Things are looking up ;)
Posted by Crystal Coco at 1:38 PM 1 comment: