What it takes… (For me to run my first half marathon)

Today I finished training (and almost threw up) I’ve pushed through shitty runs, negative attitudes, and multiple thoughts of “What the fuck did you get yourself into” BUT I also learned to LOVE running, I surprised myself multiple times, and finally believe that I can do this. In 2 short days I will achieve my goal of crossing that finish line.. I don’t care what it takes.

A lot of things happened during training.

Soon after I started (like 3 weeks into it) I had to say goodbye to Hydro.
I’ve mentioned it a million times, but I’ll say it again. Hydro was the love of my life and dealing with his situation and ultimately his death has been one of the HARDEST things I’ve ever dealt with and I’m not even close to being over it (I’m not sure I ever will)
For the first few weeks following his death, each time I got on the treadmill and started running, I burst into tears.. like full blown, running nose, tears streaming down my face, unable to breathe crying. I dealt with it by running as fast as my legs would take me.. As if running on a treadmill would allow me to run away from my feelings. It didn’t work, but at least while I was struggling so much, the physical pain dulled the emotional pain.
I decided that I would train/run in honor of my little mutt 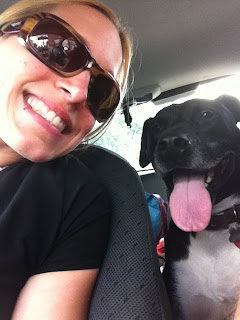 Any time I wanted to give up, I thought about Hydro.
I have his collar hanging on my rearview mirror- and I got into the habit of touching it each time I was driving.. especially on the way to run. I would remember the strength I had to find on his last day and use that same strength as my inspiration.

Also during training:
We brought Tuna home
I quit my job (that really sucked a lot, lol)
I got a new job (that I really love a lot)
I started to eat meat after 15 years- following a Paleo-ish diet
I discovered that Lamb and bacon are amazing
Learned to love ice baths
Discovered compression socks 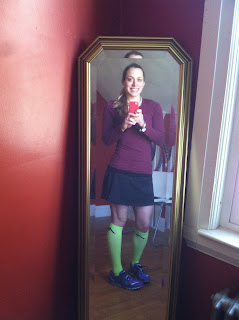 And found some leg muscle definition ;)

Whatever happens on race day, I will be confident and trust my training. Whether I reach my time goal (which I was told not to make since it is my first half.. but that’s not how I roll- so I did anyway, lol) or I just cross the finish line, I will be proud of the last 4 months and all that I accomplished leading up to it.