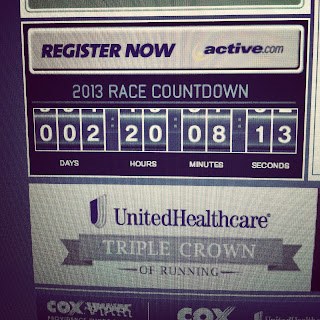 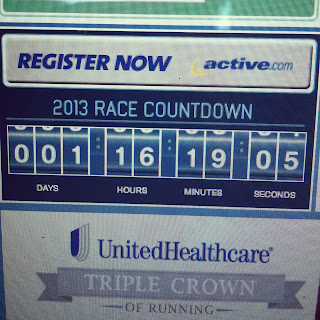 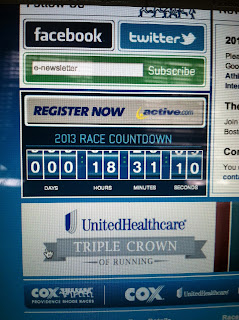 You could say I was freaking out a little bit ;) I was super nervous, a million things running through my head- since I didn’t really know what exactly to expect- granted you can’t control everything and I knew ultimately that i would just have to trust my training and my body to get me through.
I had to work both Friday night and Saturday morning- which meant a lot of time on my feet. I made sure to eat good food and did my best to get lots of sleep (Which totally didn’t work)
Saturday I even whipped out the foam roller and the yoga mat to stretch things out a bit 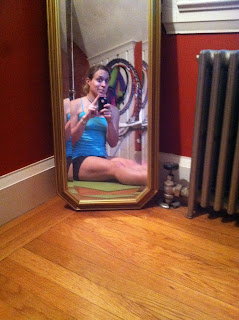 Then I set my clothes out for race morning 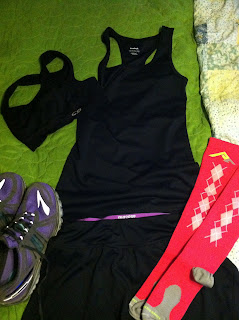 I showered and braided my hair- which I had decided was a good idea to do the night before.. I can braid my hair with one hand tied behind my back most days, but when I’m stressed I just can’t get it to work and then I get really annoyed, which I didn’t want to deal with on race day. It turned out to be a great idea BTW.
I was drying off from the shower, my necklace broke off. I’ve had that particular necklace on for three years (I’ve owned and worn that bead on my neck on one necklace or another for over 9 years) So I was sad that it wasn’t going to be around my neck for race day- but glad it broke at home instead of on the course! 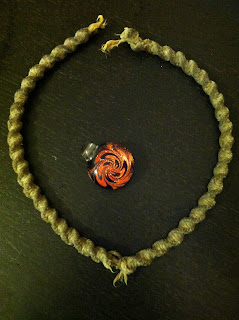 And then I taped up my shin- hoping that it would alleviate the pain that I have had all week. 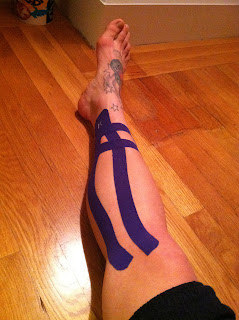 Unfortunately I didn’t get the kind of sleep I should have.. James was sick all night which woke me up at 1am- from then on I got a couple of winks here and there.. Thankfully I still felt pretty decent and ready for the day. I drank coffee, ate my usual breakfast (Greek yogurt, banana, almond butter, chia seeds) and got dressed- and added a little motivation right where I could look at it when I was feeling down It was raining and grey.. which I was bummed out about at first, but actually turned out to be awesome.
I got to the starting line around 7:40am- and stood around watching the marathoners start. While waiting, I couldn’t help but notice the amount of crazy security there was everywhere (which is nice, but a little unnerving at the same time) I’m talking guys heavily armed on roofs, with bomb sniffing dogs, walking around…
The half marathon was supposed to start at 8am but it started 20 minutes late.. which meant I was standing in the cold rain for about 40 minutes before starting. 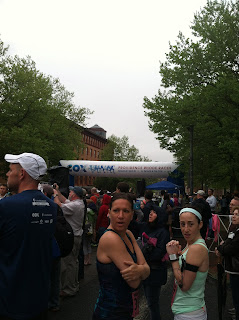 Once we finally started I was very happy it was drizzling..
I had two main goals for the race. #1 finish, #2 no walking.. (#3 was to come in under 2 hours) As I was running the app on my phone was telling me I was right on track, but the mile count was off.. 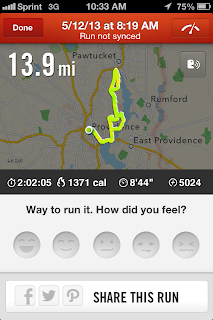 I’m still waiting on the official race results.. but according to my phone I ran almost 14 miles in just over 2 hours..
My dad and James were waiting for me at the finish line 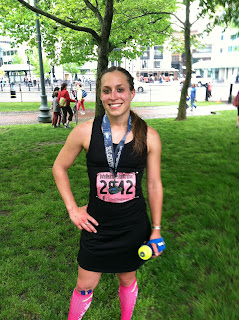 FINISHER!!!
(I felt pretty dead as you can see- hence the fake smile) 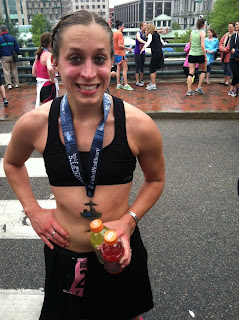 But when we got back to the car I was much better :) 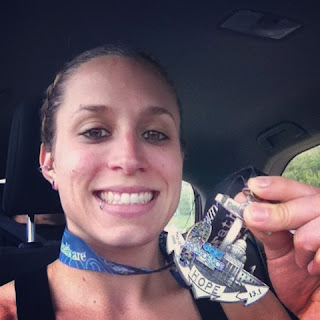 Plus we stopped at the market where I chugged chocolate milk while still walking around the store and we got 3 pints of Ben and Jerry’s, fudge and whipped cream.. perfect refueling if you ask me :) 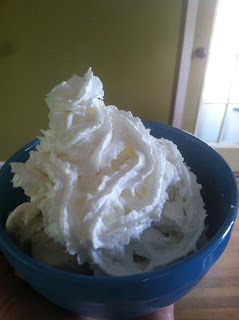 So I missed my unofficial time goal by 1:27- and I’d be lying if I said I wasn’t slightly disappointed.. but hey- I finished my first half marathon.. didn’t stop to walk, not even once! Guess I have a reason to do another one ;)

Post race, my body is feeling pretty rough. I’m walking like I rode a horse and it is extremely painful to walk stairs.. or walk at all. Good times ;)
Posted by Crystal Coco at 1:08 PM

Email ThisBlogThis!Share to TwitterShare to FacebookShare to Pinterest
Labels: Half Marathon, Races, recaps