We woke up pretty early with the sun both blinding and cooking us. We got cleaned up, ate some food and repacked the car for the day. We figured there would be a Starbucks on the way- since they are all over the place here- but as it turned out… there wouldn’t be a Starbucks (or anywhere to get coffee- like at all) until we hit Amarillo Texas.. I’m talking 1 1/2 HOURS away. Rough way to start Day 2.
But before we even got to the coffee, our first stop in Texas was Shamrock 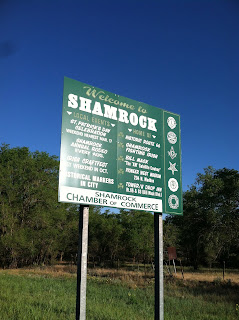 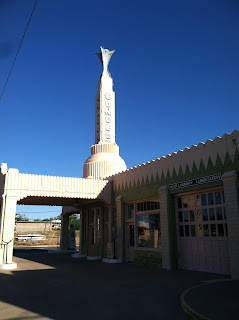 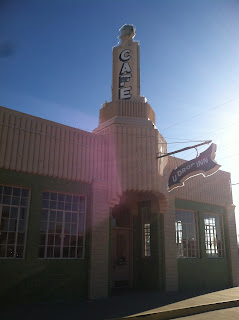 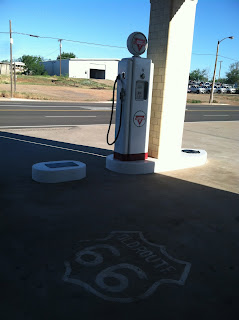 And let’s not forget about the fancy Barbed Wire Museum (which wasn’t open.. but even if it had been there is no way I would have gone in.. I mean how much can be said about barbed wire?) 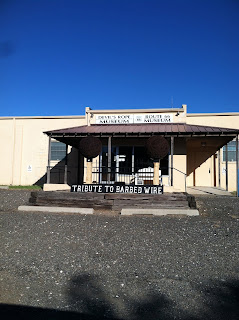 There was the Leaning Water Tower And the 200 ft. Stainless Steal Cross that we could see on the horizon 10 miles away.. Overkill much? 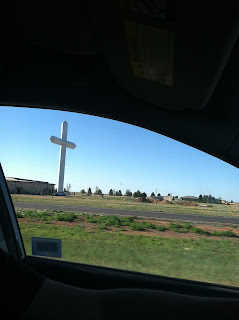 (Both of which weren’t cool enough to get out… actually we took the pictures while driving.
We made it to Amarillo Texas and it was finally coffee time! I stole the internet for a little blog and Facebook time while we sat in the sun on the deck. 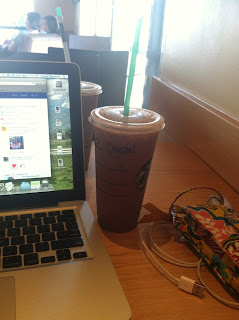 But, the funny thing about the south is that people always want to talk to you.. which is awesome, but it’s just not like that in RI.. So it almost always catches my by surprise. Oh and the other thing.. People in the south seem to have no idea what Rhode Island is- and trying to explain it doesn’t help anything. Either way, I managed to get some work done in the middle of all our chatting. I kind of love all of these nice people!
So after coffee, it was time to hit one of my most anticipated road side attractions..
The Cadillac Graveyard 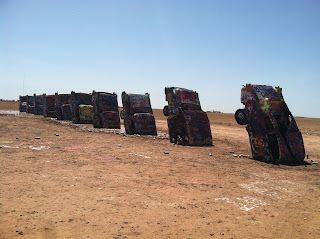 Tuna Moose was super pumped too 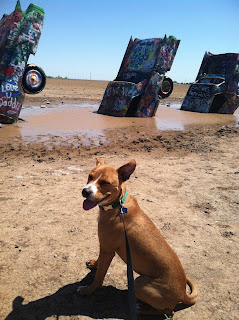 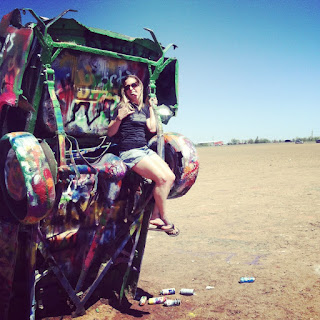 I totally forgot to bring a can of spray paint along to sign our names.. but as it turns out, if you search through the hundreds of cans that littered the ground, you might just find a half used can ;) 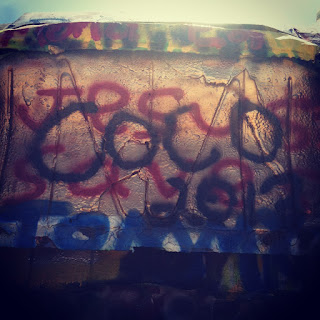 Straight from the Graveyard, we went a couple miles up the road to set up camp. The first place didn’t allow tents, but the second place did.. and it was only $21 to stay the night! 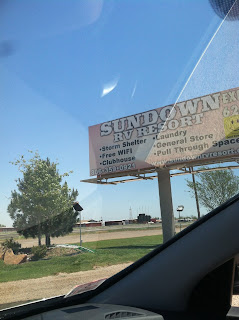 The plan was to get our space all set up and head back out for the rest of the afternoon.. but we ran into some CRAZY wind.. so we set the tent up anyway and hoped it would still be there when we returned 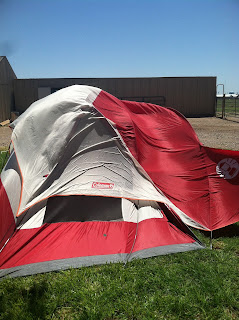 (I realize it doesn’t look like anything much… but seriously the wind was laying the tent flat- it was bananas)
With the tent somewhat secured (Fingers crossed) the next stop- more coffee.. This trip is completely powered by sugar (in the form of LOTS of candy) and caffeine (mostly in the form of Starbucks) Coffee in hand- (even better we only got charged for one!) we drove out to the Palo Duro Canyon 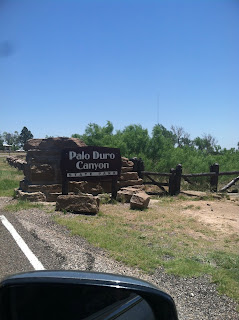 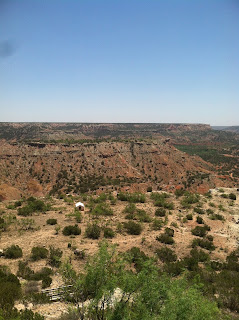 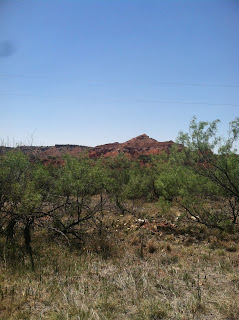 We attempted a little hike that the girl at the front gate suggested. It was only 2 miles, but when your in the canyon its at least 10 degrees hotter than at the top, which made it 115 degrees.. so really 2 miles seemed like 10. Poor Tuna Moose does not do well in the heat (even though I sun screened his little nose) and at one point started to cry because the ground was just too hot for his little paws.. James had to step in and take care of business 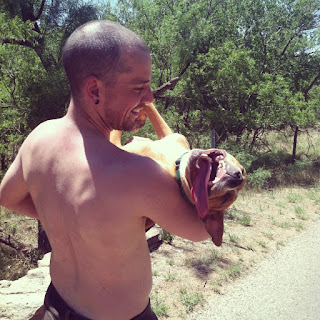 You can tell by the smile on Tuna’s face, he couldn’t have been happier!
Though we had planned to do a second hike, we knew Tuna couldn’t handle it, nor could we leave him in the car.. so we just drove through the rest of the park and enjoyed the views from the AC :) As we  were driving out of the canyon I looked down at my legs and saw that I had some crazy rash thing going on, on my right leg. Me being me, I started to freak out- but really it looked WEIRD- and even James was concerned (And lets me honest.. he’s a boy.. he doesn’t freak out about shit like that). So I was one of those people.. asking the park rangers if I was dying from some kind of crazy desert jumping spider or something. He just laughed at me, rolled his eyes and said “Um, no.. thats just an allergic reaction, your fine… hahah” Great dude.. I’m glad I made you laugh, I kind of feel better now?
Obviously he was right. I haven’t died, yet.
We went back to the camp space and our tent was still there! Woohoo! So we showered and chilled for a bit 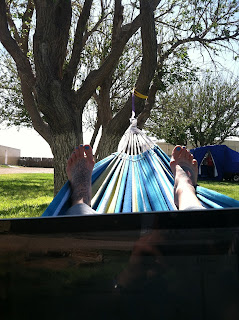 (A hammock, computer and Wifi.. that’s my kind of camping!)
FINALLY it was time to go to dinner! 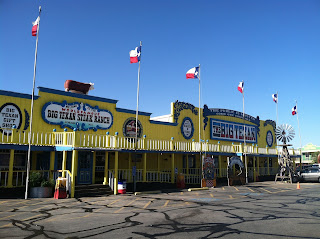 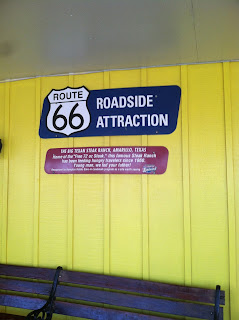 Not only a “Roadside attraction” but also was featured on Man Vs. Food.. (if you eat a 72 ounce steak plus all the “fixins” in under an hour you get it for free) I have never seen so many cowboy hats in my life.. or a bigger bucket of butter at a table 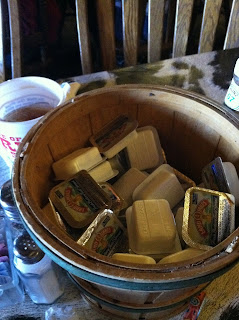 I went with the Ribeye.. and I’m not gonna lie, I ate pretty much every last bite of it.. When in Texas, eat like the Texans do 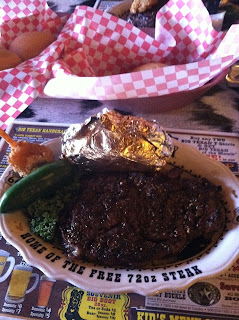 YUM
With exceptionally full stomachs, we headed in for the night. Tuna had had enough and passed out instantly 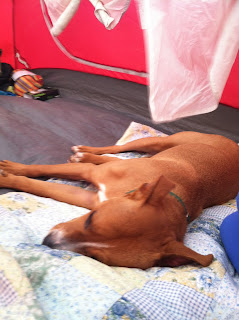 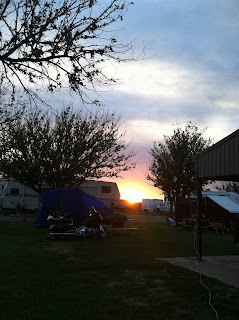 The night was absolutely perfect.. It was windy and cool and I felt like I could have stayed out on that hammock all night…. until some big creepy desert bug landed on me..  yeah, Fuck all that noise- I went into the tent!
As I tried to go to sleep, the wind really picked up. Like “We’re not in Kansas anymore” kind of wind. I tried not to freak out, but the fact that this camp ground boasted about their “Storm Shelter” didn’t make me any less worried. At least they were prepared!