BE PRESENT- one of my goals for 2013.. I tend to over think things- making up stories about how things are going to happen or should be happening instead of focusing on them actually happening.. Which means I miss out- and its time to awaken! This is partially due to having ADHD and being scared to fail or do it wrong. It makes me put things off and avoid what needs to be done… Its a goal that will be tough but worth it in the end!

The first workout of the year- 45 minutes of Ashtanga yoga.

It has been far too long since I’ve actually enjoyed the practice of yoga. Most of the time I just skip it in favor of some HIIT, lifting, or even some running.. leaving it only for when I teach Wednesday and Thursday nights. I used to love it so much, but now I find I have to drag myself to the mat and struggle even harder to stay there for more than a few Sun Salutes. Well the new year is here, its my chance to get my shit together and be consistent. I’m such a cliche’- haha.

I finished off with a green  brown smoothie while reading some blogs and half marathon training plans (Holy shit I’m scared, what did I get myself into?) 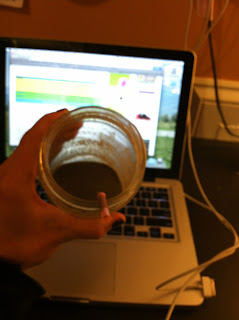 In the middle of my smoothie the boys had to go outside, and these days when they need to go out you just drop everything your doing or your going to have a pile or puddle to clean up (oh the joys of having one dog pushing 12 and another one that is still F’ed up from surgery) I took advantage of their cuteness and snapped some photos 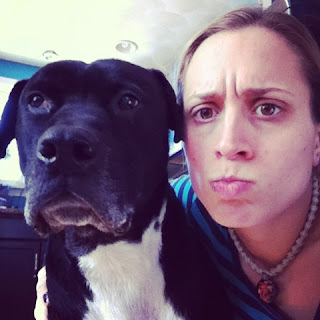 (Hydro only has one face these days.. super serious mustache) 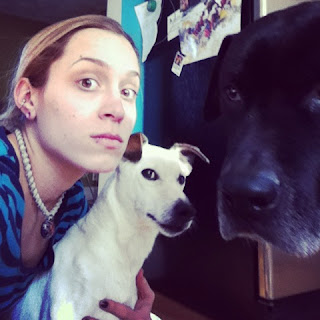 (Sammy’s face had me laughing like crazy.. as to say “seriously mom.. WTF”) 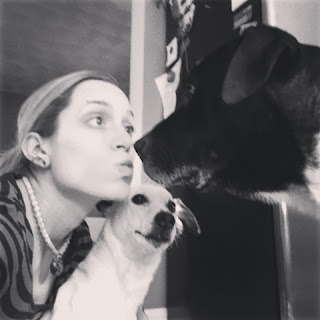 Since Hydro doesn’t lick your face off every time you look at him like he did when he was feeling swell.. I always try to bribe it out of him.. “Smoochsky Poochsky?” He just stares blankly- but sometimes you can get a wet nose in the face.. which is kind of like a kiss? Whatever.. I’ll take it!

Speaking of the mutt… I made an appointment with ANOTHER vet for tomorrow.. This is the “Last ditch effort” to figure out what is wrong. This vet was referred to us because he is an internal specialist and apparently is awesome at the “tough” cases.. Fingers crossed.. Hydro is getting worse in some respects, and we want to make sure we make the right/ best decision on where we go from here..

Email ThisBlogThis!Share to TwitterShare to FacebookShare to Pinterest
Labels: boys, WO, Yoga