I’d love to tell you this is going to be short and sweet, but I’d just be lying to ya.. I haven’t checked in.. it’s been a week.. and kind of a lot has happened!
I’m just going to start with Friday Oct. 5.
I took Hydro to a new vet in the morning. This lady was pretty awesome about listening to my sob story and looking at before and after surgery pics of the mutt. I felt a little bit crazy whipping out my phone for the pics, but she agreed that he looks a whole lot different.. Unfortunately, even after seeing her, I still feel like we need more answers about whats going on. She didn’t notice much with him physically and suggested we give him puppy Prozac.. The husband and I are still trying to figure out what to do.
James came home around 3:30 that afternoon, got cleaned up from work and we left right away on the motorcycle to take advantage of the nice weather and go pick up my race bib and packet. The mall is only 5 minutes from the hotel, and I had made an appointment at the Apple store so James could have his iPod looked at. (I bought him the iPod Classic 160gb for Christmas last year and he broke it in less than 2 months- why are men such bruts?) And yes it has been broken for that long..  We figured that they would just tell us we were shit out of luck- it was full of dents and dings from James dropping it at work a million times.. and at first they told us it would be $120 to get a replacement.. but when he got us the new one, he told us we didn’t owe anything! (He was just as surprised as we were) So we booked it out of there in 1 minute flat, just in case they made a mistake.. and ran like we stole something.
Ran right into Pinkberry! 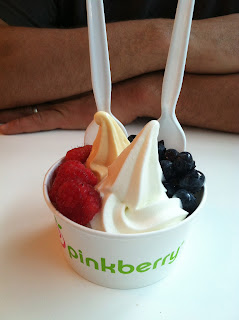 It was my first time at the famous froyo spot.. We got a small mango and original with fruit to share, (it was our appetizer before dinner after all) which was really good- though I must say I like to put my own toppings on- I would have had more than 4 raspberries!
After we housed that froyo we walked around the mall a bit.. this just killed me 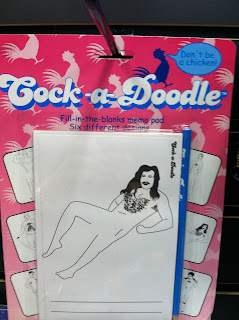 Haha.. Too much fun- a great night!
The next morning I made us breakfast 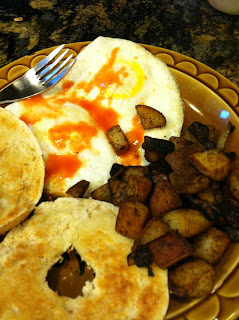 I can’t really remember what we did all day- and since I have no pictures of it, it’s like it didn’t happen.
Later that night we met up with our friends and headed to Foxwoods Casino for some fun 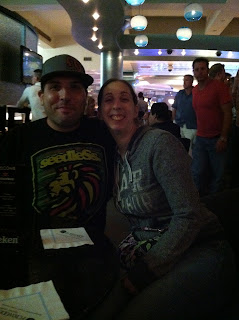 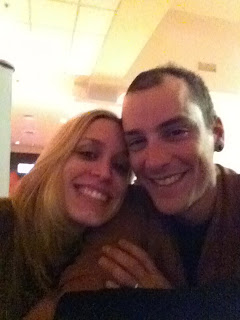 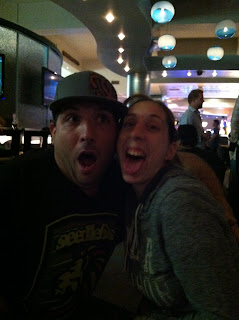 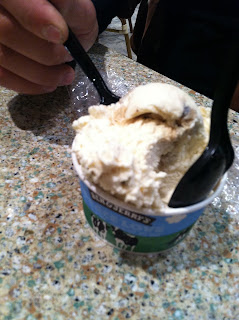 I haven’t had Ben and Jerry’s in light years.. OMG so good.. again we shared- a small Cookie Dough..  YUM..

Sunday was race day! The race didn’t start unit 11:15 so we just took it easy and hung out most of the morning. It was pretty chilly and cloudy but the ran held off for the race 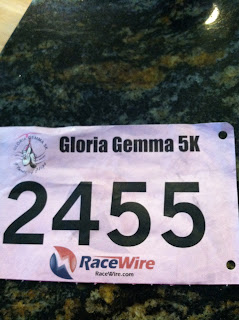 We parked in our old neighborhood and walked to the race.. which was about 15-20 minutes. which left us plenty of time to walk around a bit and check things out 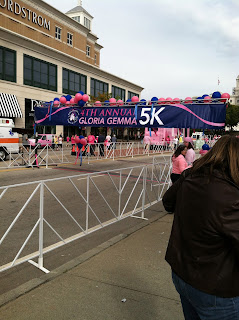 This was made out of sand.. So cool! 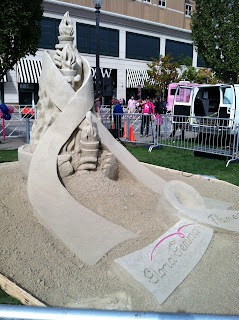 We parted ways so I could make it to the starting line.. At this point I was pretty nervous, cold and anxious to get started. I had the “Heavy Metal” Pandora station playing in my ears and I was pumped up. (I always listen to this station when I’m getting ready to be a beast.. Maybe it’s the screaming and anger? Whatever it is.. it works for me) So... I wanted to finish in 25 minutes. I hadn’t “trained” specifically for this race since I signed up less than a week before,  but I felt that 25 minutes was a feasible goal. Along with Pandora playing in my ear, I also had the Nike running App on as well. Its set to tell me at each mile what my pace was.
The race started downhill, went through a little loop downtown and ended by running UP the hill we started down. I started quickly with a 7:40 pace, and felt pretty awesome.. except my mouth was SUPER dry as soon as I started running, which was a bit uncomfortable .. I was very excited to grab some water at miles 1 and 2, though both times more water ended up down my shirt- not intentionally BTW.  I focused on a couple of the other runners to keep pace and by the time we were about a half mile away from the finish line I was ready to push it.. I knew that I would have to dig- because there was no way I was going to come this far NOT to finish in 25 minutes!
The run up the hill to the finish line was pretty awesome… Yeah I couldn’t really feel my legs, or breath at that point but I was pumped! I finished in 25:07 according to the Nike Run App, and according to the official results 25:53- I’ll take it! I finished 36 out of 919 in my age group (0-39) and 174 overall (out of 2600) 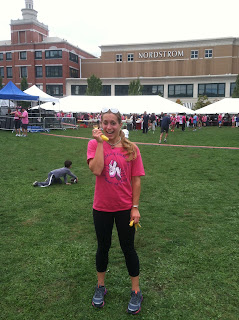 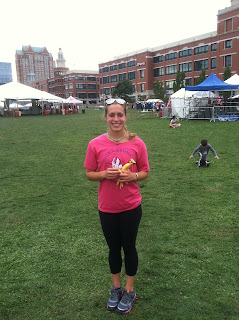 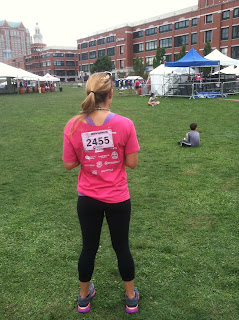 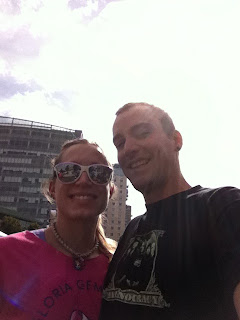 After eating a banana and some oreos and guzzling more water we started to walk back to the car.. We made a pit stop at Starbucks- where the barista thanked me for  running (so cute!) The coffee was amazing and just what I needed :) Unfortunately we came across a smushed Praying Mantis 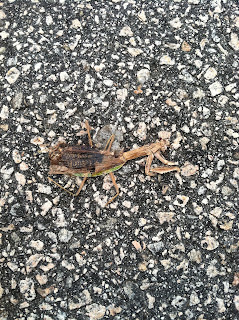 (Poor little dude.. This guys are endangered and it is illegal to kill or even mess with them)
Once we got to the car we drove to Wholefoods to pick up some stuff, and ended up grabbing some Subway for lunch (By this time it was nearly 3pm and James was starved.. I wasn’t so much but got a veggie salad with avocado to hold me over for dinner.
You want to know the best part about running? Not feeling the least bit guilty about eating this 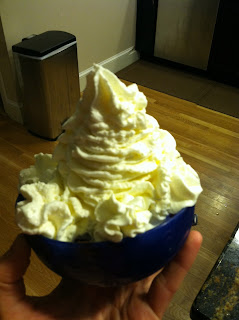 WAY under the mountain of whipped cream is fresh strawberries and a drizzle of chocolate.. but really all I cared about was the whipped cream.. Who needs ice cream when you can just have the topping? Oh and eating it snuggled by the fireplace wasn’t half bad either :) 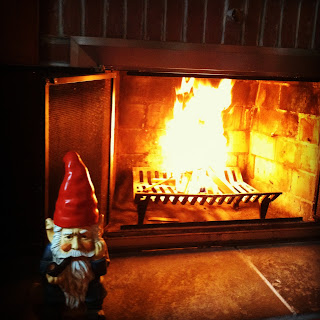 (That’s Stoney the Stoner Gnome- he lives in the living room all the time.. Smoking his pipe and sitting on a shroom) We watched some TV and our friends stopped by later on to watch a movie..  And then I passed out.. I think it was a whipped cream coma..
Since it was the holiday weekend, James was home from work on Monday.. We got some yard work done, I painted the door to our downstairs bathroom and he worked on building our new garage doors.. I had just gotten out of the shower when I heard him coming up the stairs and heard him say “You need to take me to the hospital!” I’m not the best when it comes to these kinds of situations.. but I sucked it up, asked if I needed to bring down a towel (assuming there was a ton of blood) and ran down to see what was going on.. 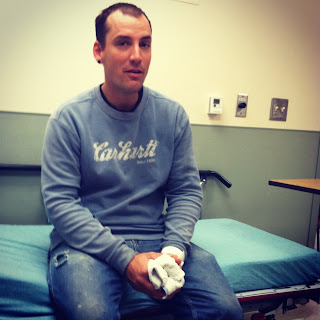 He was cutting some wood on the table saw, slipped and cut the tip of his index finger, and grazed his thumb and middle finger. Thankfully he didn’t cut off his whole finger.. or even the whole tip.. It could have been so much worse… They cleaned him up and bandaged it before sending us on our way. (there were no stitches because there was no way to close the wound)  Needless to say, James was out of work all week.. which was partially to blame for me lack of checking in.. But we spent a lot of time together which was really awesome.
In between I managed to get a couple of 4.5 mile runs in 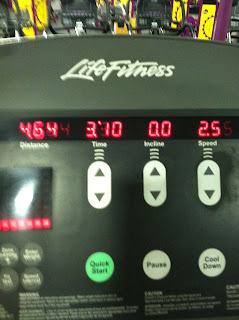 AND we found a used Vitamix at a local consignment shop… for $15! Thats right.. a VITAMIX!! And- It works and everything! Green smoothies! 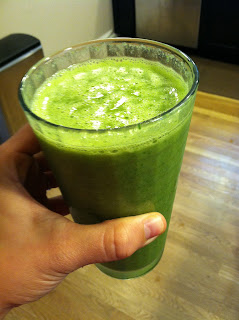 I’ve used it since everyday.. multiple times.. I love it.. no.. no.. I’m IN LOVE with it.. I’ve always wanted one.. and now that I have it.. I’m pulling a Titanic.. “I’ll never let go!”
I also went to visit my friend who just had baby Phoebe a month ago 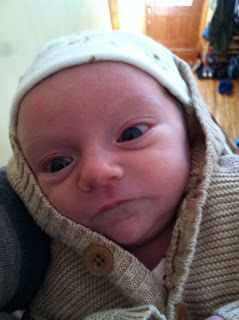 And last but not least… We went to roller derby 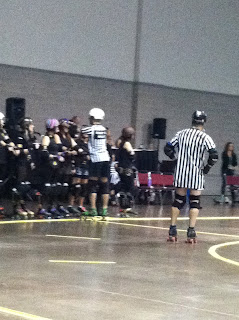 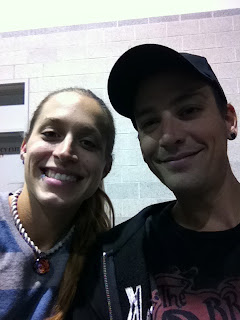 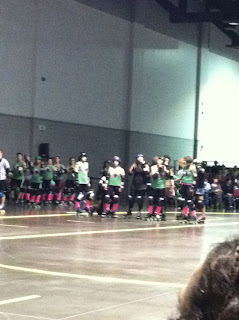 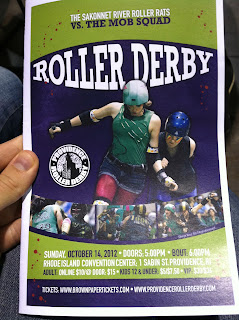 These girls are brutal.. it was awesome.. Neither of us had  ever been to a roller derby game, but we are definitely going to more! Oh yeah.. and I want to BE a roller derby girl..
Posted by Crystal Coco at 5:01 PM