Holy Hamstrings and Happy Friday! I’m feeling yesterday’s leg workout for sure- especially in combination with teaching last night and my workout this morning.  Both Monday and Thursday nights I teach classes which pretty much has me working out twice on those days. Fortunately I have a lot of energy and drink coffee :) Class was a blast last night- at least for me ;) Though the ladies really loved the wall walk-ups 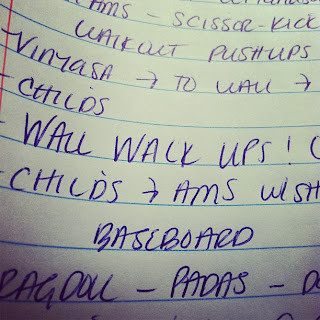 I mean wouldn’t you?

Our workout this morning was a circuit I threw together on the fly while drinking coffee and having breakfast:

Fast Friday Circuit (Repeat circuit 2x)
We ended with 15 minutes of walking on the treadmill (3.5 mph) which gave us a nice short workout to finish up the week.

After the usual (stretch, roll, refuel, shower) I spent the rest of the morning and afternoon studying my brain numb. Seriously my brain HURT.. haha- I guess I should probably space the study sessions out a bit more huh.

What are you Easter Plans?
Have you ever had your appendix removed?
Posted by ZippyZu at 9:24 AM