Whoa slacker! I’m already two days behind here… what the heck have I been doing?
Monday night I taught and of course fueled up properly before hand 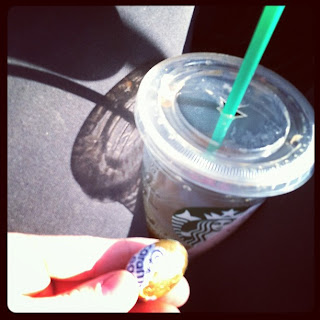 (mmmm.. mini caramel eggs and coffee= sustainable energy?)
Apparently the two together really did the trick- after teaching, James and I ate a quick dinner and then took Hydro for a walk- we tried to take Sammy too- but he was being ridiculous and didn’t even make it to the end of our street before James picked him up and dragged him home.. Silly Sammy.. when will you get it?! Needless to say- my body was ready for bed- however my head was not.. I didn’t get the rest I needed and let me tell you- I’m feeling it for sure two whole days later!
Tuesday morning Paula and I did the second day of the Summer Shred from Shareitfitness.com

Leggin’s (All exercises 4x 8 reps unless otherwise noted)
I’m really spending a lot of time with each rep- making each one count- instead of being like the meat heads in the gym who just slam around a bunch of weight with their whole bodies because they think they are awesome and strong- when really they just look stupid and are going to pop blood vessels in their heads or pull their backs out.. haha. (No offense guys- I’m sure there is a perfectly good explanation for it)  And speaking of meat heads at the gym- there is a new group of dudes- and one of their GFs at our gym.. and they are exactly what I just described.. Hey I’m not judging- I just don’t want to be around when the overly heavy for you weight, drops on your face and dents it.. And I also don’t want to hear you grunting out your reps as you spray your spit around- from the other side of the gym.. (NOT even an exaggeration)

I tried to get some studying done- but instead ended up going to Target with Paula to buy a new water bottle.. oops- Plus I was too excited about the first night of volleyball!! James and I joined a league, which he was a part of last year and it was supposed to be the first rounds of games.. I’m not gonna lie- it had been a while since I played any volleyball- and never had I played with guys who weren’t going to go easy on the spikes at my face because I was a girl.. Unfortunately there are not enough teams to start the league (3 teams signed up, but we needed at least 4) But we did end up playing the other team that did show up.. And the spikes to the face? Well those were real..
I totally pulled a girly move when I ducked and covered for some of them- 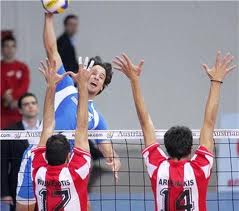 Obviously not that dude- but that same intense scary kind of face- slamming a ball at ya.. Yeah- I don’t need my face to be a welt thank you..
It was a great time- and we still plan on meeting every week for play, and are hoping that there will be enough people to play the summer league.. A couple things-

James was surprised that I did so well- and even said I was better than he is..  Awesome.. When can we play again?!

Fast forward to this morning- getting out of bed was NOT easy..  the culmination of all the workouts and volleyball, maybe a bit of a hangover, and getting up at 5AM were not rolling.. I was supposed to put together a circuit for Paula and I to do with our gym buddies (as per their request) but instead I made a half-assed attempt to find one online before heading to the gym..
What really happened was Paula and I doing “Bi’s and Tri’s” with them leading the way.. it was actually kind of fun to have them tell us what to do, and push us to do more weight (because you know their guys and are way stronger upper body wise) It was way too much fun- and we did a bunch of stuff that I had never done before.. I didn’t write any of it down, but I did make them do Burpees- and felt better that they were struggling with that as much as I was struggling with the bicep curls..
Hopefully there will be more combo workouts with them in the future to help switch things up..

Have you ever worked out with Gym buddies?
Posted by ZippyZu at 12:31 PM