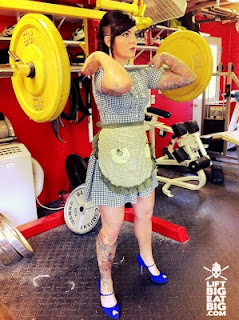 BADASS!
I immediately sent the photo to Paula asking if we could make something like this happen. I mean maybe not the heels because I’m pretty sure I would break my ankle- though it wouldn’t be the same without them..

Sundays have been pretty lame around here. For a while now I have been working at the Toaster each Sunday and by now you all know how much I love my job, haha. Well yesterday was no different- except that it was probably one of the crappiest in a while. I should tell you that the all you can eat buffet that was down the road from us closed down ( Maybe I did tell you? Who remembers these things..) So since then we have been serving some very interesting characters. I felt like I was running around like a chicken with my head cut off and was stuck there for far too long, making only $85. Usually I bring home at least $130- 175 during a 4-5 hour shift on the weekend (The only reason I still work there BTW) People are just super rude and treat us even more shitty than usual for $2 or $3 a table- most of the time it just feels super degrading scraping the tip of change off the table. Plus someone decided to write the N word on the front walk-way…Nice people huh? Seriously- what is wrong with the world?
After James and I both got out of work we went to grab a coffee and sat in the sun for a bit before browsing in a couple stores nearby. One of those stores happened to be Vitamin world and James may or may not have spoiled me with something new. 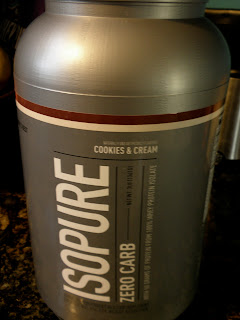 I know I told you guys that I didn’t really like the Strawberry one and that I wouldn’t spend $50 on protein again.. (But again James bought it for me- he totally spoils me I swear)  and that was true but I have to admit that this product has really grown on me.. and now I actually really kind of love it. Hey I’m a woman.. I can change my mind- it’s not only allowed, its kind of the law. We went with the cookies and cream version (There were 8 different ones!) I tested it out with 1/2 cup greek yogurt and it was delicious. I have yet to make a smoothie with it but I’m sure it will be just as good.
I also bought a couple things to try out: 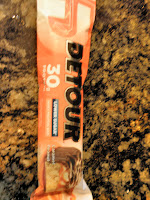 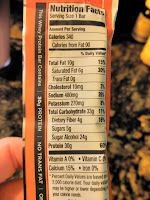 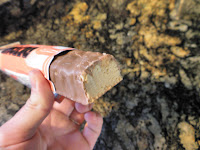 Actually James had this bar before and told me I would love it. There is no way I would eat this whole bar, unless I was having it instead of a meal, but I sometimes buy bigger bars like this and cut them up for little bite sized snacks- plus it makes them last longer- at $2.50 per bar that is really important! I like this bar overall, but I’ve had better. While I love that protein taste and texture usually, this one was a little dryer and a bit more crumbly. But it is a nice treat to have once in a while- it’s like a protein version on a snickers bar.
Finally I came across this protein while checking out the sale section: 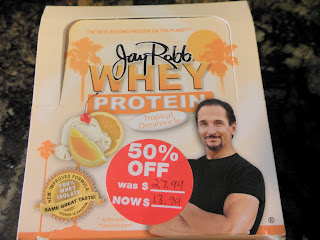 I’ve seen Jay Robb products at Whole foods before- but its expensive and I couldn’t commit. So this was a perfect opportunity! (There are 12 single serve pouches in there) This product is made with milk that has not been treated with growth hormone and it is sweetened with Stevia. I tried it out this morning after my workout (Crappy picture quality coming your way!)

1/2 Cup whole milk, 1/2 Cup water, 1 pouch “Tropical Dreamsicle”, 1 T flax oil, 6 frozen strawberries
Verdict: YUM :) It definitely tastes like creamsicle (and the flavor was strong enough to cover any trace of the strawberries- which I added because I didn’t have ice and I really prefer a frosty kind of smoothie) I feel like it’s just sweetened enough with the stevia- though it does have that taste that comes along with the stuff- which isn’t uncommon in products that have stevia in my experience. I don’t think that I could drink it every single day like the chocolate and strawberry proteins, but it’s definitely a good switch-er-up.

BTW I’m starting to think I have a little problem: 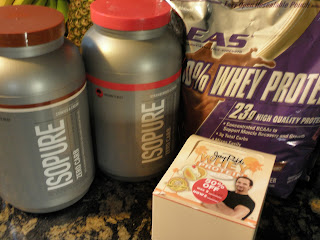 Anyway.. Let’s get on with things…
Day 71 (Week 11!) Paula and I were able to grab a barbell and stick near the leg press machine the whole time- no walking and jumping around for us today!  We had five exercises, 30 reps each- completed back-to-back- with no rest until all five were completed. (3-5 minutes rest after each circuit)

This was a speedy workout- we were done in just about an hour.  (There was no cardio today) What a break from all of the recent 2 hour days! I really enjoyed this workout and even though it was shorter I still left the gym a sweaty mess.

On the schedule today? Homework… which I’m going to attempt to get done this morning so I can enjoy the amazing weather that we are supposed to have. I also plan on doing some prep work in the kitchen for quick lunches and dinners throughout the week. (Brown Rice, Hard Boiled eggs, Granola and some veggie prep.)
What are your Monday To-do’s?
Posted by ZippyZu at 5:55 AM