Ramblings
Sometimes it pays to be that annoying person that calls to fight a medical bill. As it turns out my new insurance hadn’t started until Jan.1 and I had gone to the doctor Dec 30 with those new cards. Leading me to get an additional bill of $83 which was on top of the $20 co-pay I had made! Now the company is going to bill the original insurance, so here’s hoping that they pay and I can keep that $83 in my bank account… Fingers Crossed…
Paula and I are one day away from the end of week 11 Livefit Trainer… I can’t believe it went by so fast! We have been really loving that the workouts have been shorter- back to about 90 minutes- but the way that the circuit style workouts are… sometimes means that we are taking up quite a lot of machines at once, bouncing all over the place. We have also been splitting the longer Cardio sessions between machines just so we don’t go crazy with boredom…

Handstand Pushups
For a while now I’ve been working on my Handstand holds- which I’ve shared with you before and your probably sick of hearing about ;) But a few weeks ago while I was at the gym and chatting to Ryan (our first real gym buddy) about yoga and teaching, Handstands and Handstand pushups came up.. him asking me if I could actually do a handstand pushup… and me being me.. I said’ “Uh.. I don’t know if I can do one.. I think I can, let’s see” and I immediately kicked up against the wall and pushed two of them out! Not only did I shock and impress myself (I had never ever done it before) it got Ryan in that competitive mode and attempted it himself. He did a couple too! We then decided that we would practice and have a rematch- this time to see who could do more, instead of just being able to do it- in a couple weeks…
Of course I’m not about to let a boy beat me.. (it’s healthy competition!)


So here is your mission.. should you choose to accept it.. include some handstands in your workouts- they build shoulder, forearm, finger and core strength.. They are super fun and just plain awesome.. Then you can add some handstand pushups if your feeling brave (I would suggest a nice soft pillow between your hands the first time), juuuust in case- you don’t want to smash your gorgeous faces!

Factoid Friday
- I went to the dentist Wednesday for a cleaning and I have a small cavity..  I got lectured about flossing for like 10 minutes and told that I need to take my lip ring out because it’s going to give me stress fractures in my teeth.. I know I have to floss and I try every single time I leave the dentist to get in the habit- it lasts 1 week usually.. So here we go again- lets keep flossing!
- I LOVE broccoli and always have- even when I was a little girl- I can’t go a whole week without it, ever. Cauliflower on the other hand- I never liked until a few years ago. I know they are from the same family and are similar but I still don’t love the stuff.. Usually I have to roast it with some honey or maple syrup and chili powder, but I keep trying to like it steamed.. Then this happens: 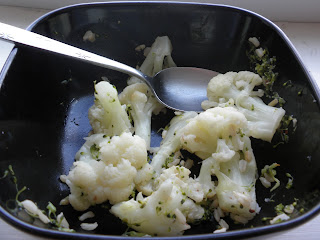 I added it to my lunch yesterday along with Broccoli, Brown Rice and Tofu (all had been prepped earlier in the week and I wanted to use some stuff up) Turns out I don’t like it reheated and ate around in like it had the plague..  My puppies were the recipients of my remains.. (Food will never go to waste with those garbage disposals)
- I am obsessed with the Summer Olympics- Most importantly swimming (duh) and gymnastics.. though I love track too.. Ok Ok.. I love it all. for the 2008 Olympics James and I had to “borrow” cable from our landlord who lived downstairs so that I could record and watch every little bit- I say borrow but we actually had his brother sneak us into the basement so we would connect to his line.. Ok- maybe it was stealing more than borrowing.. lol.. but we disconnected it right afterwards :)
- This year, we still don’t have cable or TV for that matter and I’m already working on James to buy an antenna so that I can get my fix (we own our house so there is no way around it this time) In the meantime I found the  2012 AT&T American Cup Gymnastics on Youtube yesterday (Who knew they could actually have an almost 2 hour long show on there?) 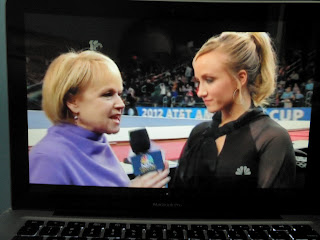 There was a short Interview with Nastia Liukin where she was asked about her attempted comeback after her 2008 Olympics all-around gold medal- this made her part of a small group of woman who won the all around at the American Cup and proceeded to win all around gold that same years Olympic Games. While she said it was much harder to get back into the gym than she anticipated, she hopes to make the team for her skills on the uneven bars and beam- and at 22 years old that’s impressive in the world of gymnastics where most of the competitors are 16-18..

What are your weekend plans?
I have to work all weekend- but I’m hoping to get in a hike with a few friends and some rest!
Do you watch the Summer Olympics? Whats your favorite sport?