But… Spring is almost here- and the end of the bag...

If you’ve never lived in New England- you don’t get it.. and if you DO live here.. then you hate it- I’m talking about the unpredictable weather… Well I’ll speak for myself on this one- I hate when people say that they like living in New England because we have all of the seasons.. Seriously?! What’s wrong with you people.. Winter sucks- and maybe someday I’ll live in a place where all the shitty seasons get skipped… But until then I have to deal with this.. You know the fact that it was in the 50’s earlier in the week- I have FLOWERS coming up in my yard already!  And then it started snowing yesterday afternoon.. poor little flowers... We were so close! While we haven’t had much snow this year.. I’m still going to complain about it.. but it didn’t stop me from making a smoothie so thick that my spoon stood up in it. (see that crappy snow out there?!) 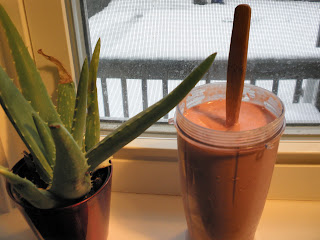 Mmm.. So good- we can forget that I had to eat it under a blanket. In today’s blend:
2/3 cup water
8 frozen Strawberries
1 T flax oil
2T unsweetened shredded coconut
1 scoop EAS chocolate Whey protein---> which led to the second disappointment of the morning 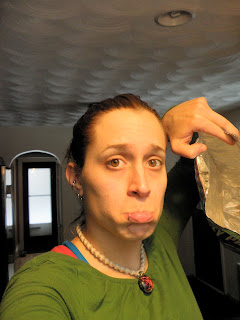 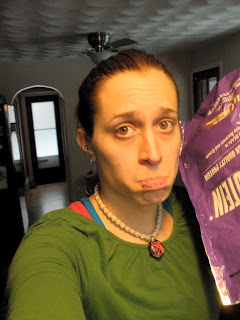 That’s right.. I’ve finally burned through my 5 pound bag of EAS Chocolate Whey.. I’m not happy about this..  and Please excuse my sweaty, messy head..

But I just returned from the gym- and we completed day 60 of Livefit trainer.. Today was a first for us too. While we were warming up on the treadmill the power went out.. At first it was just for a moment- but then it stayed off. We had already gotten 5 minutes of warm up in so we just decided to work out in the dark and silence. Well it was mostly dark- there were a few emergency spotlights on but they were so dim it barely mattered. About 6 of us kept working out- because we don’t make excuses! Haha.. It was actually kind of nice working out in the dark- but it did start to get REALLY hot in there. I guess we take the climate control for granted most of the time, so midway through our workout I was down to my sports bra! Fortunately for the last 15 minutes of our workout the power kicked back on and cooled us off to finish out the day.. but I was still left with that sweaty head!