The last few days have been a blur. Weekends always seem to fly by anyway- but getting up at 4:30 is tough, bottom line. Good news is that I’m moving back home! I’m super excited about it- and I’m looking forward to having all of my stuff back here at the house- but I’m not looking forward to moving it. I’ve only had the apartment since the middle of September; 2 1/2 months.. so I don’t have a ton of stuff there anyway- but it’s just a matter of throwing it all in the car.. times 10! I don’t even plan to get boxes, I’m just going to shove it in the Yaris and hope for the best.
So yesterday after I put Aydan on the bus- I headed to the apartment to pack a couple bags and take the groceries that I had left over there, some clothes and my mini blender- and went to the gym. My plan was to just do some steady cardio since it had been a while. I went with 35 minutes on the treadmill (I ran about half of that- one because I am desperate for some new running/gym shoes, and two becauseI’m not really a runner!) and then I did 20 minutes on the arc machine..  I skipped any sort of weight training- but I did think about it, so I guess that counts for something.  I really need to work on a training plan that is working towards something. I’m going to search for a half marathon or something- somewhere.. that way I have an actual goal… I guess normal people would start with a 5k or 10k.. So maybe I should start there.. Though I’ve never been much for normal..
Anyway- I’m baby sitting every morning this week, except for Wednesday.. I’m getting used to waking up early again- and James made today the best day yet..
Last night we went to bed at 8:00pm.. no joke (James gets up at 3:45am so he was beat too) We did some yard work, made some dinner, watched and episode of Breaking Bad and passed out.. This morning  I woke to the alarm, but thought that I could use some more time- so I snoozed. A few minutes later I heard James and his boots clunking up the stairs.. He gave me a snuggle and a kiss and told me that I had a hot cup of coffee waiting on the counter.. Talk about the best husband :) 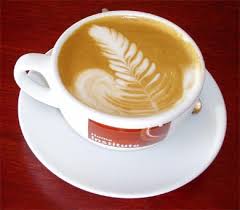 If only it looked like that.. Off to babysit- have a great day!
Posted by ZippyZu at 2:09 AM