Chock Full- Cleaning out the camera.

Here are some long over due shots from the pumpkin carving party.. Funny that I have absolutely no pictures of the people or the food- but I think the pumpkins say a lot about those who carve them: 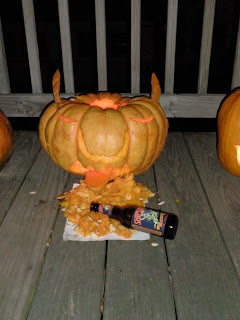 This drunken beaut was carved by our friend Chris- Came out awesome and left a mess on the deck. :) 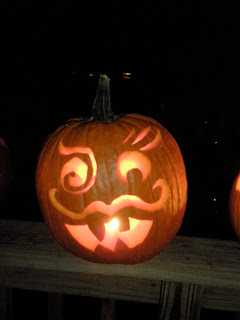 This was my pumpkin.. I had no plan, and no purpose- just went for it- a staple of my personality.. I was happy with the result! 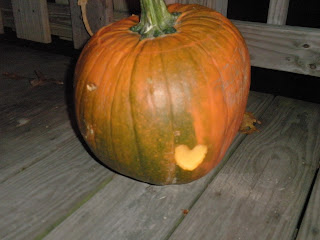 This little lady had a tramp stamp- totally classic.. Laura is a funny kind of gal! 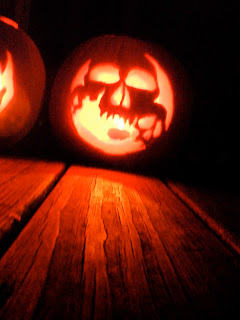 This guy was carved from one of the papers that comes with the little saws- though it’s still awesome.. I really just love how the photo came out with the deck.. 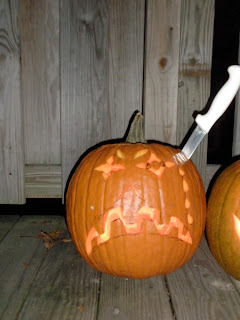 And finally this is James pumpkin- I’m thinking this is how he feels when I start bitching at him? lol Either way it was totally original.. 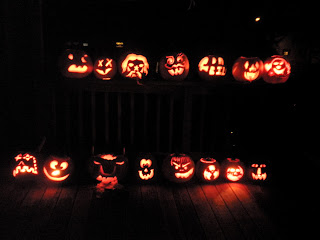 And all together now!! Thanks again to everyone who came out- it was an amazing time and I can’t wait to see what the deck looks like next year (Since it doubles in people each year so it seems.. it’s going to be amazing!)

It’s getting to that time of year when it’s cold enough to make you want to stay in bed- for fear that you’ll freeze to the toilet seat first thing in the AM.. Though I don’t have to pay for heat in the apartment (Hurray for everything being included!) I don’t have to worry about it- However.. at our house- we DO have to pay for oil heat- which is super expensive.. along with the fact that the whole front of our house is made of cobble stone… Yes I think I may have frozen to the seat before. I hate having to get bundled up to go to the gym.. 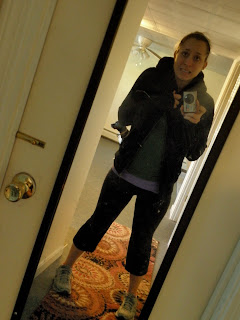 Hello?!? Why did it snow in October?! You might be wondering when I’m wear crops if I’m so cold.. Its hot at the gym- especially when your working your butt off (literally)

Since it was a bit warmer for Halloween I got to rock my lovely Frye boots.. Any excuse to wear them is a good one (especially since I’m still trying to convince James that the $300+ that they cost was worth it.. it totally was BTW) 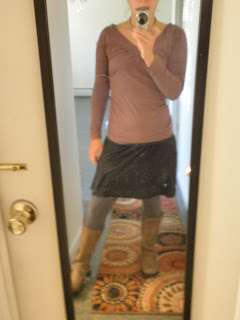 For a while now I’ve been doing some strength training as I mentioned.. which had lead me to read a TON about the amount of protein I should be getting to support my workout efforts. I’ve been looking at a ton of powders and while I haven’t decided on a powder that I would be using daily I did some across this Cookies and Cream protein… and couldn’t help myself.. One scoop in a cup of Almond milk with a few cubes of ice and it was YUM!  Thank you 25g of protein..
I was pretty excited because I just purchased this GE personal blender (comparable to the magic bullet that I don’t want to spend $50 on- I got this 17 piece set for $18!!) This thing is amazing.. it works better than any other blender I’ve had I swear!! 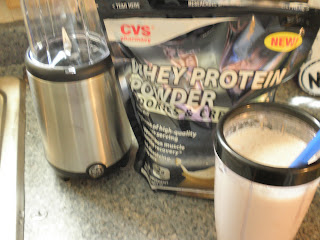 After sipping on my protein shake I headed to the house to get my make up on.. No we weren’t going anywhere or doing anything but giving out candy and having some wine with dinner- but I wanted to be in the spirit! This was just my second attempt (the first attempt was seen in the last post) 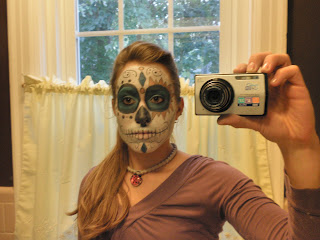 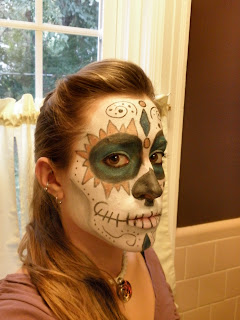 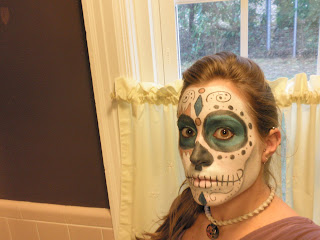 I was so pleased with how this came out! The white base really makes it stand out especially with the shading of the jaw.. Seriously had WAY too much fun with this!! I felt a bit silly going to the door handing out candy like this.. since I wasn’t dressed up- but it was fun and I think I even scared some kids! The make up only lasted about 3 hours before it started to irritate me and I had to wash it off.. I think this will be a yearly tradition for sure!

How was your Halloween?!?