Yell it out- at a random rude stranger.

… Today was a beautiful day- filled with falling fall colored leaves, sunshine and a light breeze. I woke up at 7- even though I didn’t go to bed until 1:30 this morning, and made my usual morning coffee and oatmeal with blueberries, coconut, chia seeds and almond butter :) I watched Felicity on Netflix while I ate and drank the coffee and tried to decide what I wanted to do workout wise.. I ended up going with Pilates because I haven’t been going and I really miss the core blasting burn! Class was awesome- I came home for some snackage and  cleaned up.. Even though it was so nice out I found my self on the couch watching more Felicity because I’m addicted to it and have watched almost all of the seasons over the past few weeks (I feel like a loser!) Finally I decided that I should take advantage of the day and knew that Hydro would love a swim.. so I packed him into the car and called Paula to drag her along. She lives next door to the parking lot where I usually start my walk- so she agreed to walk over and meet me. I pulled into the parking lot as per usual and some random guy started yelling at me.. the exact words, “Slow the F*** down!”
Now lets get something straight.. First of all I drive a standard- which means I can really control my speed… Second of all it’s a Toyota Yaris… 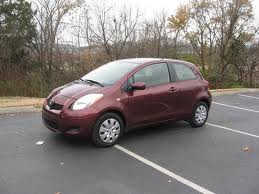 Exactly like this one (same color and everything, isn’t he adorable?!) Third- I was pulling into the lot from a stop.. so I barely made it to 2nd gear.. I was driving no more than 15-20 MPH.. Not fast by any stretch of the imagination.. Of course I was pretty mad that this guy was yelling and swearing at me- I’m just trying to take my dog for a swim damn it! I leashed Hydro up in the car- instead of letting him run lose like usual.. and got out just standing and waiting in the lot for Paula- while looking for the guy that was so tough, haha. He didn’t show his face until after Paula showed up and by this time my blood was pumping, my heart literally pounding out of my chest.. I know what your thinking.. who cares, why didn’t I just let it go? Well the long and short of it is that I used to have a really bad temper.. I’m talking super short fuse- anything would send me in to a screaming rage.. I’m not proud of it- but I had a lot of anger and didn’t know how to deal with it at the time. Anyway the Coco is long gone- but today she came out in full force.
As soon as I seen him come around the corner (there is a building that used to be a restaurant and a day care and is now nothing but apparently this dude has now bought the place and is turning it into another failing business) I started walking towards him. I simply said “I don’t appreciate you yelling and swearing at me for no reason, I wasn’t driving too fast and it was uncalled for” Well that started a screaming match between the two of us and I was pissed. I couldn’t believe that this grown man would yell, scream and swear at a girl half his size. I’m not going to go into the gory details of the words exchanged.. because they are definitely not PG and like I said.. old Coco was out… so it was bad.. Haha- At one point he told me he was going to call the cops- now I’m not sure what he thought they were going to do.. but he also said he was going to show me a lesson.. so I thought best to NOT leave my car in that parking lot- ever again. I got Hydro and Paula in the car and we parked down the road… It’s funny now- but I can’t believe that I got that pissed and literally put myself in a really bad situation. Thankfully I had Hydro with me the whole time and he looks pretty mean- even though he would just lick you to death I know that he that dude tried to do anything he would have totally bit him. Plus Paula was looking on with her phone out and ready..
Either way I don’t like to see that side of myself come out. I have worked really hard to be the person that I am today- and I know there is much more work to do.. especially after the way I acted today. I think that the old Coco came out because of all the other crap that is going on in my life. Things seem to get harder each and every day- and I’m pretty sure that I don’t know how to handle it- which is why I lashed out. a few hours later.. James and I fought on the phone… he said some really hurtful things… Things I never thought I would ever hear from him. Each and every time I feel like things are getting better they just get worse. I’m not trying to be a downer- but this needs to be my place to let these things come out. I feel like I have no other way to let them out. I feel like I have no one to talk to who can truly understand or who wants to hear another tale of the Coco and James show. I feel like one of those girls who just is making stupid decisions by staying in the situation.. but I don’t know what else to do..
Both of us are hurting. Both of us need to communicate better.. I hate feeling alone- and worse I hate feeling like I’ve lost my best friend.. I know that things will never be the same between us- and I just don’t know if there is anyway that we will be able to come together and both be happy. Right now I feel like I will never be completely happy with him ever again. But the feelings are still raw- the wounds are open and infected. I tried calling my Dad and talking to him about everything but he kind of made me feel worse. Not that that was his intention- but I guess I was just looking for someone to be on my side.. Not that it’s about sides- but in the moment I just wanted someone in my corner. You know?
I’ve made such a mess of everything- and now here I am.. in my own apartment with Hydro.. alone. Sometimes I feel so alone- like no one will ever love me the way I deserve to be loved- like the person that I am is so hard to deal with that no one will ever love me for me.. I struggle each and every day to like the person I am and I hope that one day I will love myself. I want to heal.. I want to be able to be proud of myself. I want to live life and make something of myself. I want to know who I am.
Posted by ZippyZu at 3:51 PM