The Jamestown half-marathon was set to start at 6:30am, so I did my best to get everything ready the night before. I worked a double, so by the time I got home it was already 10pm, which meant I had to move my ass so I could actually get some sleep.
I already knew what I was wearing (totally broke the rules of racing and bought brand new stuff- which turned out great, no bloody legs this race!) 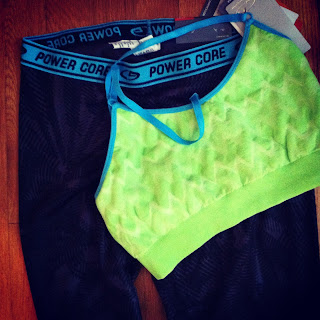 And packed some clothes for after the race.. because last time I was so uncomfortable in gross sweaty stuff for the whole ride back home.
With my bag packed, I took a shower and finally got to bed around 11:30.

My alarm went off at 4am, I jumped out of bed and did the whole coffee and breakfast routine. Then I taped up 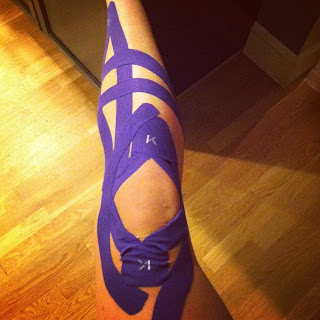 We drove to Newport to park and pick up my race packet before I grabbed the shuttle to Jamestown for the race start. (There was supposed to be no parking in Jamestown for the race) It took forever to get my race packet- apparently I wasn’t the only one who couldn’t pick it up on Friday- which meant I had  to take the shuttle instead of waiting in another line for the bathroom. (which I did anyway once I was near the start- another line!! I was literally standing in line for 20 minutes to use the bathroom… come on people there are hundreds of us trying to pee here.. your hair and makeup look fine.. get the F out!)
The weather was overcast and a little drizzly- perfect running weather. 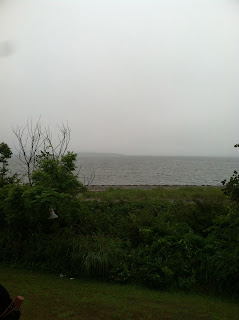 The race started 20 minutes later than scheduled, but I used that time to attempt to pump myself up. I ate a couple Honey Stingers right before the gun went off. The course was beautiful, lots of amazing houses and views of the water.
Surprisingly enough, I felt pretty good physically (but it was HOT and I did walk a few times which I wasn’t thrilled about… but my hips and quads were seizing up) 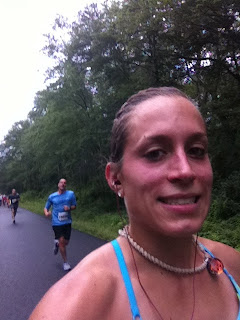 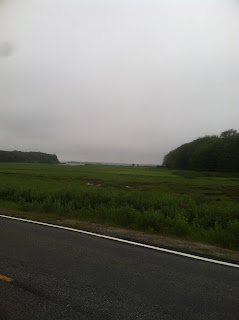 And the Stingers weren’t sitting well, so I tossed them out and just took gatorade at every water station and thankfully my stomach chilled out.  Mile 10-11 was the worst… There seemed to be a bunch of little hills that I just struggling to get over- but I did my best to push forward. Each time I rounded a corner and saw another hill staring me down I swore.. out-loud.. It helps. At this point I saw the time and actually thought I could make it under 2 hours so I dug deep.  Finally I was a mile out from the finish rounding the corner I saw the Newport bridge. (THANK YOU!) 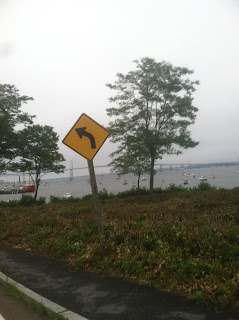 I’m not gonna lie, I walked part of this mile.. but man I was hurting! As I got closer to the end, there were a bunch of spectators cheering and yelling “It’s just around the corner!” “Finish strong!” etc.. and as I saw the finish line and the clock I knew I had made it in faster than the first one so I ran through as fast as my legs would let me- which probably wasn’t fast at all because I couldn’t really feel my legs.. (the clock read 2:01:16 the last moment I saw it, which was 10 seconds faster than my first time)
Huzzah!
G was there waiting at the line for me to finish- which was awesome..  (He was also cheering at mile 2 and 6 and had no idea he would be at the finish line so it was an even better surprise) There is nothing better than crossing the finish line and running into a hug. 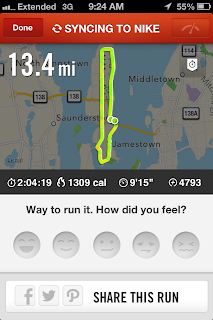 (I forgot to stop my Nike Run app right away, oops)

Just like my first 1/2 marathon, I wanted nothing to do with food immediately post race. They provided pizza and watermelon- I took a piece of watermelon because it sounded good, but I only took one bite which made me want to vomit so I tossed it. Instead I grabbed water and gatorade for the walk back to the car. I was so grossly sweaty, I changed halfway in the parking lot before taking another really bad picture 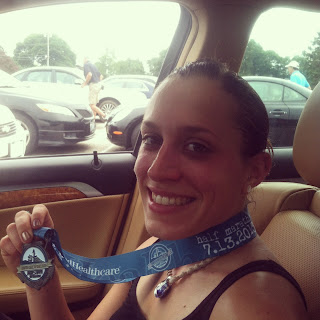 Who cares if I look like crap?! I finished!
All I cared about was getting some chocolate milk and taking a shower, haha. And that’s exactly what I did. After my shower, I laid in bed… from 10 until 3.. sleeping on and off. I didn’t feel hungry for hours afterwards and then it hit me.. I was STARVED..
G made me bacon and eggs (as per my request) along with fruit and yogurt. (So good!) which I devoured while watching Blow.. Oh and don’t worry, there was dessert a little while later too ;) 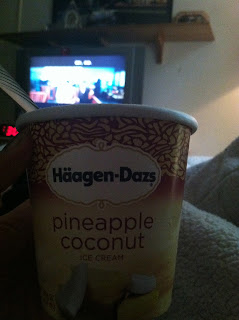 I can honestly say I feel much better post race than the first time around.. but I am definitely sore.. my muscles are extremely tight… and I got the official results this morning..

I’m so happy with that time, especially considering my lack of training.. I’m really looking forward to the Newport 1/2 and the next 3 months of training… Getting closer… Sub 2 hours, lets do this!
Posted by Crystal Coco at 10:16 AM

Email ThisBlogThis!Share to TwitterShare to FacebookShare to Pinterest
Labels: Half Marathon, Races, results