Day 4 started with some breakfast- lots of coffee, eggs and oranges 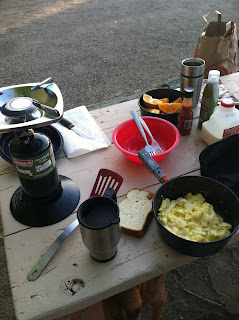 Now we were on a mission to get to Arizona. As we drove out of New Mexico, we stopped at a couple of the Indian Trading posts that line the highway looking for something to commemorate the trip, but nothing really stood out to either one of us- until the last place… Now of course I didn’t take a picture or remember the name of the place.. but really that doesn’t matter.
It was basically a run down, dusty (everything here is dusty BTW) little shack, crammed full of artifacts   (it was a combo of a pawn shop, trading post, and museum?) and random shenanigans.. Walking through the door, your hit with the potent smell of sage burning (like so strong it gives you a headache and makes you choke- but it was awesome) The woman behind the counter greeted us with a big smile and explained to us that she was burning the sage because she needed to get rid of all the bad energies and people in her life.. (I already know that and I hear ya, I can relate to that shit- hey can I have some sage?)
Anyway, we talked to her for at least 45 minutes while I tried on a bunch of rings and James was looking at some stuff… And when I finally picked something and went to buy it, she told me it was on the house 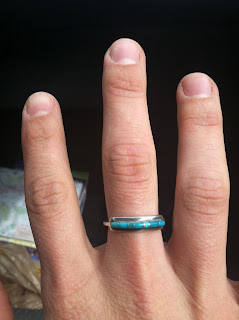 (Ignore my ugly man hands)
I’m going to take it as a sign of good energy coming my way..
She also gave us some local treats 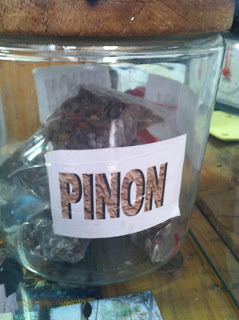 Pinon is kind of like a pine nut.. but it only grows in 3 states and only has good harvests every 4 years (I don’t really remember- I think the sage was really getting to be at that point) Either way.. they taste pretty good- so it really doesn’t matter.
We continued on our way and came across more old signs in the old Railroad town of Gallup (Lots more pictures coming your way) 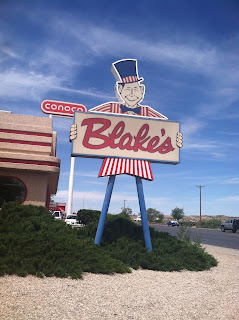 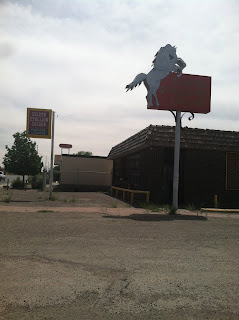 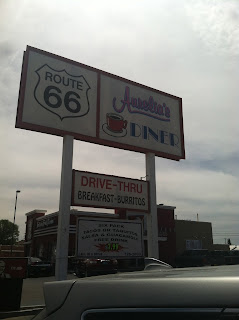 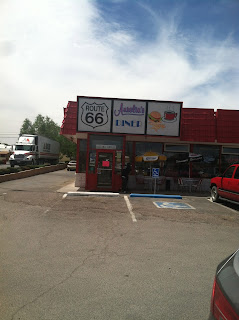 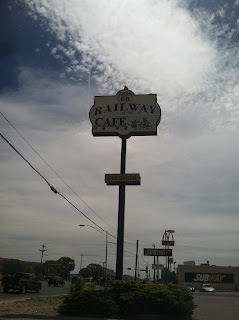 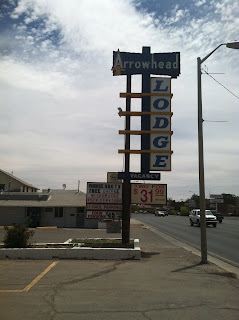 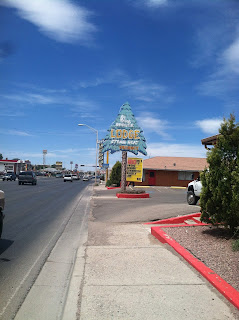 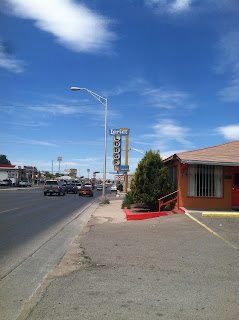 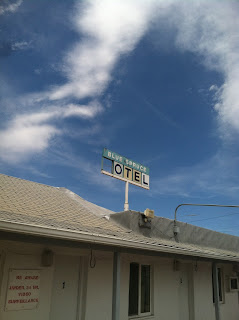 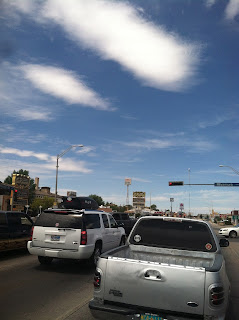 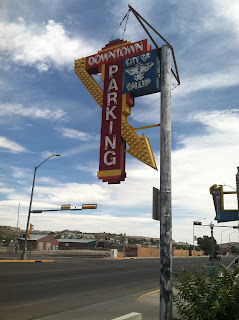 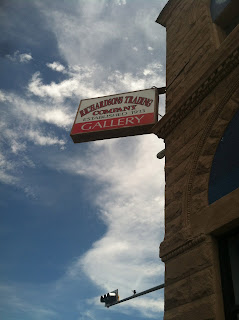 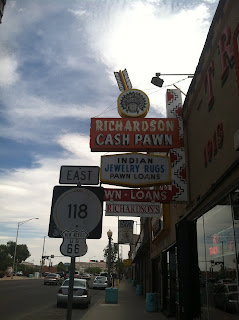 Filled with lots of awesome stuff that I’ll never be able to afford… like ever.. and one of the creepiest/ saddest things ever 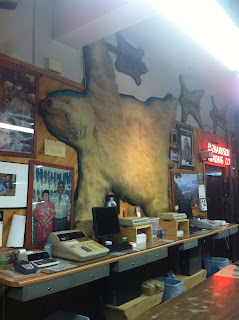 Polar Bear skins will make you wanna cry :( Poor little polar bear..
I was ready to leave after seeing that.
Hello Arizona! 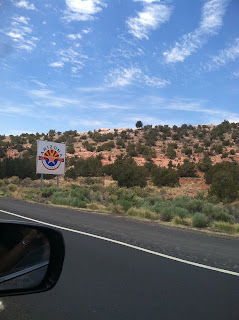 And because sometimes fucked up people and shitty situations require special treats .. 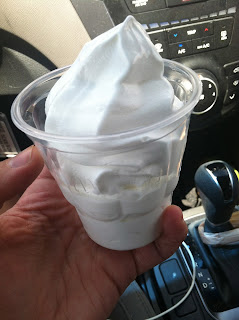 Thanks McDonalds.. Oh and there was also a huge coffee from Starbucks with lots of whipped cream to help too. While at Starbucks, we reserve a site 70 miles from the Grand Canyon.. Yet another KOA campground 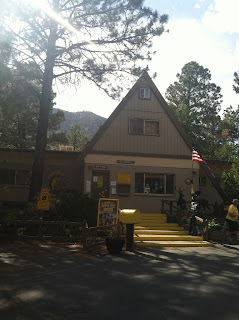 (This one is the best yet!)
Even better, there are paved roads and a loop around the campground that is right around 1/2 a mile.. Which means I had no excuse not to run 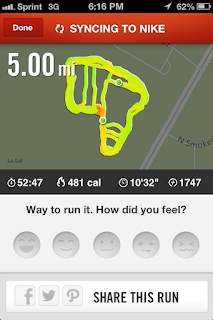 Ignore the amount of time it actually took me to complete this run because while I was running laps:
I ran into a Bob cat;
a little dog chased me;
a random friendly dude who thought the middle of my run was a nice time for a chat- which included him suggesting I trail run up the mountain, ha.. he was funny.. but in later laps he gave me a bottle of water :).
And 3 separate campsites of families counting the number of laps I ran.. throwing up fingers (to count the laps.. not tell me to fuck off)

And while this run wasn’t as bad as the last attempt in New Mexico.. it was rough..
As it turns out, running at 7000ft is fucking hard. (swearing necessary) 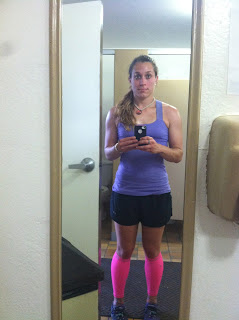 Notice the purple face..
Thankfully while I finished up my run, James went to the store for dinner supplies and started cooking- and bought a bottle of wine too..  Wine is perfect for refueling, there has to be electrolytes in there…. at least it counts as fruit. 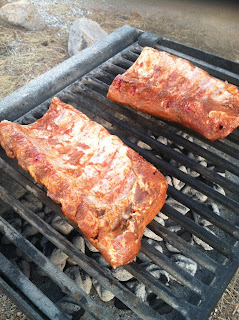 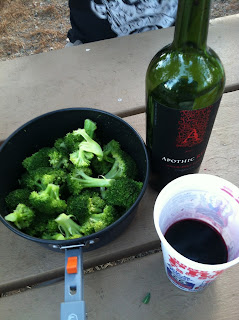 Who needs wine glasses when you have plastic cups from The Big Texan Steak House?
As we ate dinner, our neighbor (who happened to be from Texas) asked if we wanted a piece of pie.. He warned us that it was ugly, but completely homemade (by his wife).. with pecans grown at his mothers house, picked by his sons.. 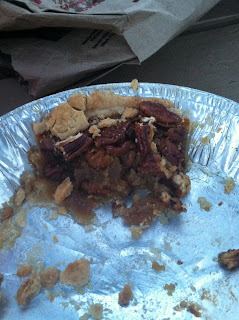 (I snapped a picture after we took our first bites and realized it was the best pie ever)
ok.. so I know I told you guys that the pie from the Midpoint Diner was the best pecan pie I’d had.. But scratch that..
Seriously..
Maybe it was the crazy fresh pecans, or the secret recipe, or because it was free (hahah.. that definitely added value) I don’t really know.. But I’d kill someone for another slice..
(Also.. it totally made up for their snoring that kept me awake half the nice.. it was totally worth it)
So again.. Thanks Texas
Posted by Crystal Coco at 9:37 PM