Spectating at the Boston Marathon

MONDAY
James woke me up at 4am with coffee already made, because he really is the best. Our train was leaving at 5:04am from T.F. Green Airport. Of course we really hadn’t planned ahead or anything so I just scrambled to fill one of the camelbacks with water and shove a coconut water, a couple apples, oranges and Vega bars before running out the door.
We made it in time for the train, despite the lack of clear direction as to where we were supposed to park, etc. (This station was just recently added so they are still working out the kinks it seems.)
It was surprisingly cold, so we took shelter in the heated waiting area 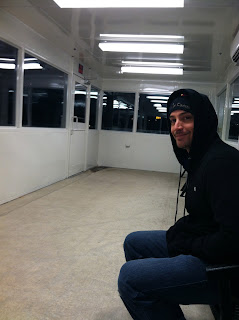 The ride felt LONG. I think it took about 1.5 hours. Eventually we got to South station and walked our way over to this awesome tiny diner in the center of all the huge high-rises 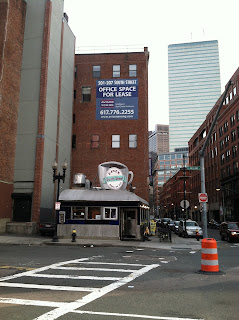 James has eaten there a bunch of times when working in the area and had been wanting to take me there for a while. It is a blast from the past for sure 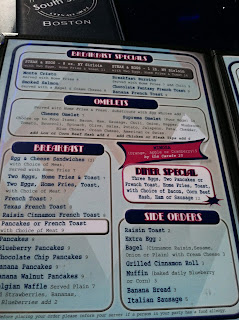 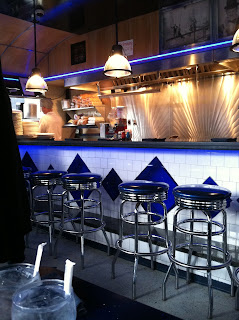 (Can you see the cook with the paper hat?!) 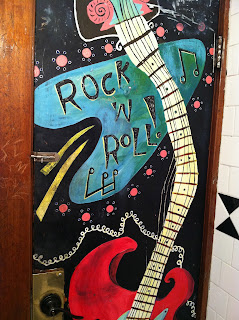 I was famished and in desperate need of coffee (I drank 3 cups during breakfast- I think I have a problem) I went with a “Supreme Omelet” stuffed with broccoli, jalapeños and cheddar cheese 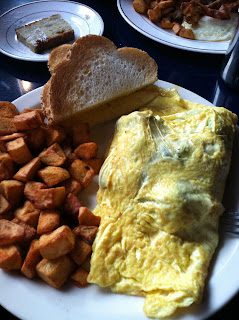 I didn’t eat the toast or the home fries- but I did eat half of James’ pancakes (I had a bad weekend, gluten wise, and my stomach hasn’t been the same since) James actually ate a little less than half my omelet though, so we’re even! 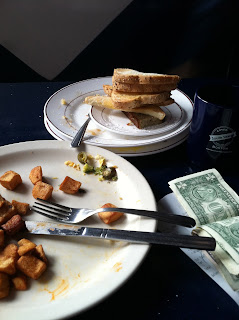 Stuffed, we took back to the streets to wander around and wait for the marathon to get going.
Check out this building 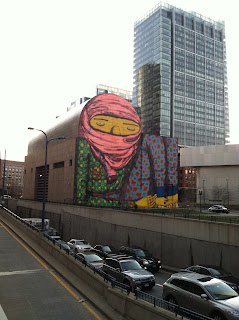 This is spray painted! So cool.
Eventually we made our way towards the finish line of the race. Our friend had decided to meet up with us, so we went into the shopping area to wait for a bit- since it was a bit colder than we anticipated. We grabbed some Starbucks (Yes, I had ANOTHER coffee.. I told you I have a problem!) and walked around with Sean, taking some pictures. 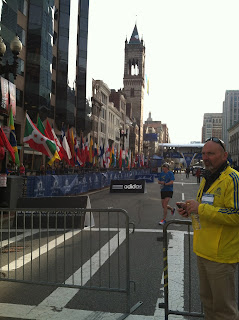 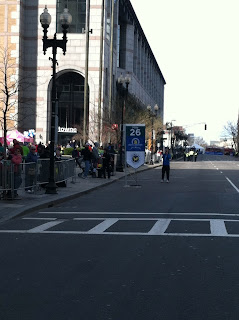 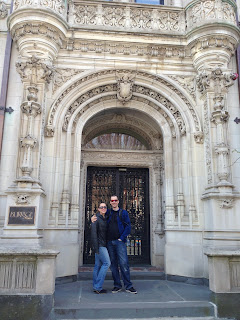 This was my first time spectating at a marathon or any event like this. The energy was amazing and I was so excited to be a part of it. Around 11:30 we found a spot  where I could stand on one of those cement posts and see over the crowd (right in the middle of the final stretch of the race- where I could see the racers round the last corner and also see people finish) We watched as the amazing folks in the wheelchair/bikes finished first- these people were so inspiring, my eyes welled up a couple of times. I was screaming like a mad woman, cheering them on!
Not too long after, we saw the elite woman finish 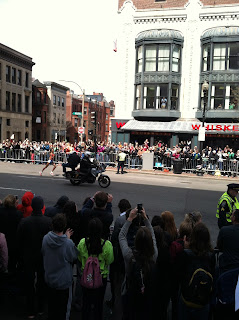 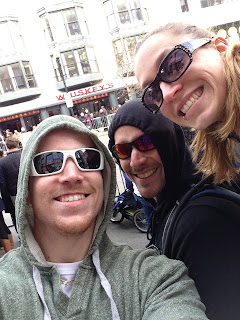 By this time I was freezing so we just stayed for the first 3 men finishers. Sean wanted to take us to one of his favorite ice cream places (which sounded crazy at the time since I was already frozen) so we left.
I took one last picture from the elevator of the Copley Hotel where Sean had parked 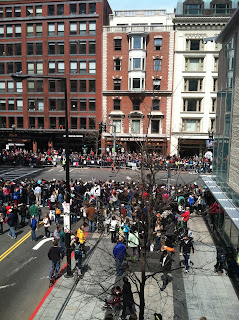 Little did I know this would be the site of one of the bombs a little while later.
While finishing our ice cream, Sean got the call about the explosions.
Had Sean not met up with us, it is likely that we would have stayed to watch longer and been hurt. We walked by both explosion sites multiple times, settling near the second site for over 2 hours.
When we heard the news, I started to freak out. Freak out for the people injured, the people that witnessed it, freaked out because it could have easily been us. It was all a little too close to home.
I immediately started checking my phone for updates and information.

James and I had to actually take the train back home.
I didn’t want to get on that train.

James kept me calm as we made our way to the train station. All I could think was that there were going to be more explosions and going right back into the heart of where it happened just seemed like a really bad idea, but we had no choice. While they had stopped service of the subways and buses around the bombing site, the commuter rail was still running. We got on the 4pm train and made it home safely. The whole time on the train I was checking for updates and talking to the surrounding passengers trying to piece together what was going on. I was getting texts and James was getting calls from friends and family who thought I was running or had a suspicion that we went up there and we were happy to report that all of us were safe. Later in the day I would find out that so many of my acquaintances (and bloggers I follow) were there too- and also safe thankfully.

Of course all of the images and headlines in the hours and days that followed of those not so lucky are what is really stuck in my mind.  I’m just so sad and heartbroken- taking something that is a culmination of hard work, determination and celebration- and attacking it is just so incredibly terrible. Words can never describe it.

For now, we wait for justice. We stand together and get out there and support one another- through donations or a run or whatever you want to do to remember those that were not so lucky..