Maybe you can help me out… Day 66 Livefit Trainer.. Shit that happens to a Denny’s waitress..

Does this match? Its kind of hard to tell exactly what colors they are.. but the shirt is light purple and the pants are a shade of green.. 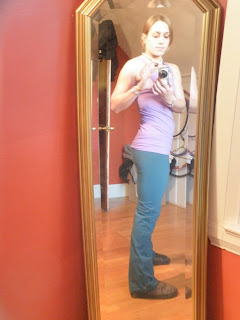 Looks like it matches to me! I was getting ready to hit up a yoga class at the studio before teaching my own class last night since I totally slacked on stretching post morning workout in an attempt to make it to work on time. Turns out it doesn’t matter if I skip stretching, skip showering, sleep in my work clothes, sleep in the parking lot at work or just never leave from shift to shift… I’m still late.. Damn it!  So I took basic yoga (which also happened to be the first time I’ve taken a class since I don’t even remember when.. unless you count the classes I actually teach) Class was pretty decent, a much slower pace than I really care for, but it was nice to stretch it out. I added a bunch of vinyasas (Flow from Plank-Chaturanga-updog-downdog) to make it more my pace.. and felt pretty relaxed afterwards. Unfortunately only one student showed up again for class and so we ended up skipping out. (She prefers it when there are other students around so she can feed off of the others energy- and I personally am a much better “fitness” teacher in a group setting) Instead we ended up chatting for a bit and called it a night.
While I wanted to stick it out longer (it’s been about 6 weeks), this day/time wasn’t drawing students so I told my boss we are going to squash it.. Boo! However the Monday night is going strong- so fingers crossed it keeps building!

As I was driving home something popped into my mind… and I made a snap decision.. 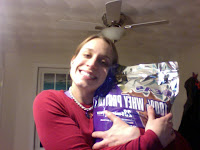 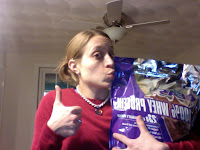 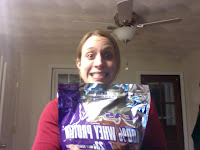 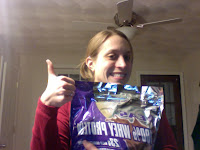 Yup.. I couldn’t wait any longer.. I had to replenish my EAS chocolate whey protein.. Forget finishing that other stuff first.. Pshh.. almost a week with out you was far too long.. I made a smoothie as soon as I stopped smooching the bag.. mmmmmm.. I missed you!

This mornings workout was one of the shorter ones of the week, but for some reason both Paula and I were struggling.. We were both feeling weak and sluggish but managed to pull through:


Burpees, and the last triple set were EPICally difficult today- I was a gasping- super sweaty mess, which is really embarrassing when the handsome Marine is a few steps away.
P.S. Paula took her measurements and she is down 7 total inches- just from phase 2!!!!  Go Paula!

- 8am customers want two chocolate milkshakes- Ummm, Hi.. I don’t know if you realize that your kids probably don’t need to have milkshakes for breakfast- there isn’t an epidemic of childhood obesity or anything and why did they have to pick chocolate? Scooping the chocolate ice cream is like trying to cut granite with a butter knife.. Don’t you know I just did a whole lot of upper body work?!
And here’s the real kicker.. The bill came to $47.68 and you gave me $50 and said “keep the change!” Obviously you need the money more than I do.. or your just assholes.. Have a nice day.


Well the weather is AMAZING here in RI today (in the 60’s!!!) so James and I are going to hit up Providence for some coffee and walking time as soon as he gets home from work.. What are you doing this evening?!
Posted by ZippyZu at 12:36 PM