Look what I got…. + Jack Lalanne + injury update

I knew it was coming.. I used the tracking number to check it since the day I ordered it.. and I was growing impatient! Morning workout went well and I didn’t have any plans for the early part of the day and I wanted to get started….
But then, just as I was standing outside hanging wet clothes out on the line unable to feel my fingers, (Because hello Coco it’s February in New England and it was somewhere in the low forties- FYI we don’t have a dryer and line dry our clothes all year round- if it is below freezing we hang stuff on lines and racks in the basement) Anyway.. where was I…. Oh yeah… The UPS truck pulled up! I was so exited (by now it was 1:30pm and I was anxiously waiting) that I met him as he was climbing the steps. we made some small talk, I signed the little signy thing, and then I practically ripped it out of his hands.. Ha! Like I said I was excited.. 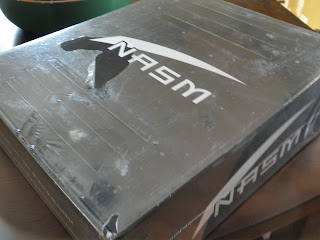 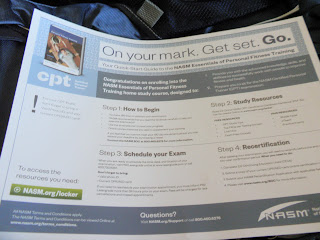 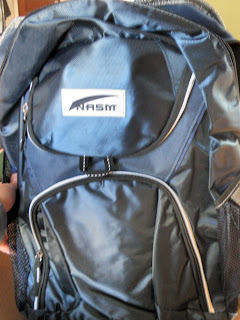 OK the backpack is a tad bit dorky.. I can’t imagine myself strutting around with this strapped to my back.. but hey I appreciate the sentiment.. All that was in the box was that paper up there and this backpack. The textbook was hiding inside... 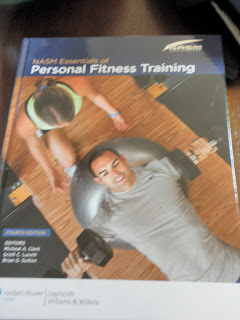 I feel like I’m in high school all over again.. This thing is at least 10 pounds. I wonder if I should cover it with a trader joe’s paper shopping bag- make it more official.
So there we have it, the studying has already begun. I guess the ADHD meds are working because I read, took notes.. lots and lots of notes.. and made flash cards for over 2 hours and I was so caught up in it, I almost forgot to put my class together! I feel like I’m learning already..  one of the more surprising things? Jack Lalanne. You know the dude with the juicer: 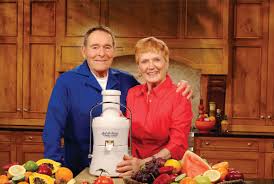 As it turns out, he had a huge part in the fitness industry surge.. A few key points:

- He opened his own health club at 21 years old
- He hosted America’s first fitness show “The Jack Lalanne Show” From 1951-1984!
- He was the inventor of the cable pulley weight training system AND the Smith Machine (which I personally use almost every time I’m at the gym)

And as it turns out he was a pretty handsome man in his day (I’ll spare you the naked photo that I found while searching his name!) 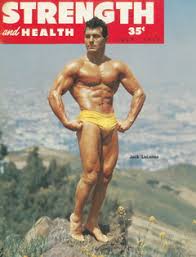 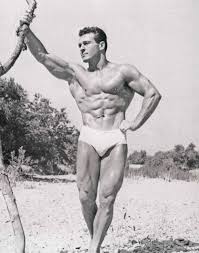 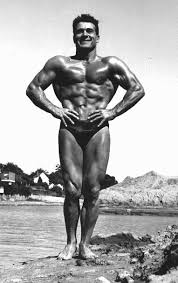 While my inner thigh is still pretty sensitive to the touch, I’ve been foam rolling it faithfully and stretching it out, which seems to be helping. I was a bit nervous about teaching last night and going to the gym this morning- because I knew I would be running interval sprints- but everything was fine.. so I’m going to keep it up- and I’m probably going to apply some KT tape before I teach tonight.
In case you have never used this stuff before, I’m here to tell you that it is amazing stuff.. It’s expensive and kind of hard to apply on yourself- but it can really help to shorten heal time.. I’ve used it on multiple injuries, most recently this past summer when I pulled my IT band while rock climbing: 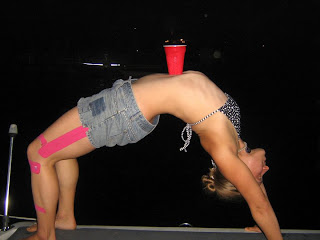 (4th of July- I may or may not have been drunk- and when that does or doesn’t happen, I tend to do backbends, handstands and handsprings.. I have no idea why…)

Yes it looks a little silly the tan lines I had when it finally came off (after about a week) were hilarious..   However, it helps increase blood flow to the area (which we all know is the key juices we need for happy healing) and can even give just enough support so you can continue to be crazy and ridiculous :) It’s breathable, stretchy and safe to keep on overnight (unlike regular sports tape that will cut off circulation) Depending on the location it will stay on anywhere from 3 days to a few weeks..

Did you know that Jack Lalanne was that awesome?!

What was your workout today?
Week 10 day 65 of Livefit trainer- I can’t believe there is less than 3 weeks left!