I’m just going to cut to the chase.. I was too busy living to post the last few days.. But know that I still went to the gym every day and allowed Jamie Eason’s Livefit trainer kick my ass (though I took Saturday as my rest day and did the last workout of the week Sunday instead) and instead of posting about those workouts.. I’d rather post about what I actually did besides them, ok? Ok!

Friday night I went out with the girls for Paula’s birthday! We went out for sushi and drinks and then headed to Paula’s cousins bar for more drinks post dinner.. Her cousin was buying us shots and before I knew it I was playing nurse to the birthday girl that got sick before the night was even through! Poor thing! Good thing I’m responsible and wasn’t drinking as much as everyone else so I was able to drive her home and literally push her up her stairs and hand her off to her boyfriend (who was not thrilled that I brought his GF home totally wasted and throwing up everywhere.. but what can you do? it was the girls birthday and I made sure she got home safe.. my job was done!)

Saturday morning James and I took the still drunk Paula out for a birthday breakfast.. We came back home and decided to take advantage of the nice weather.. time for a hike in the woods! It’s hunting season so we had to make sure we were decked out in our orange gear.. Hydro was sitting at the door CRYING while James cleaned out the back of his car for the drive.. 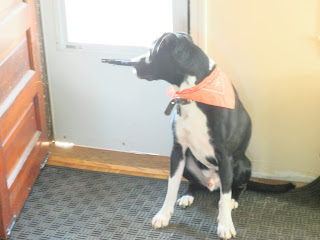 It was beautiful in the woods.. it was cool- but not too cold.. and the boys had a blast! 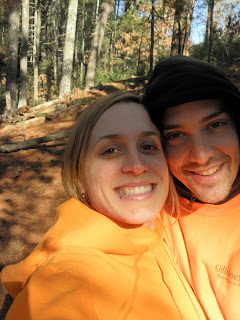 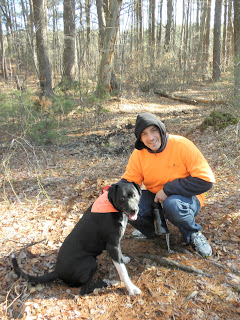 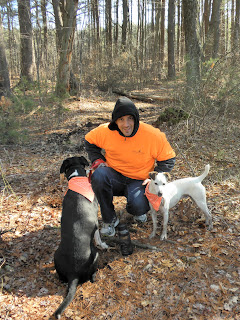 .. and we attempted to get all of the boys in one shot.. but Hydro wasn’t hearing it. 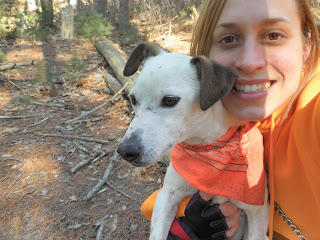 Self-portrait with the small mutt.. I think Hydro was keeping his attention..

As we were coming to the end of the trail we decided to let Hydro swim. an attempt to get Sammy into it as well.. It was really cold water for sure.. and Sammy wanted no part of it.. but I threw him in anyway.. because I’m a jerk- and he was uber muddy.. He was NOT happy. haha
Hydro was having a blast at usual.. and seems to feel right at home in that water.. But once we got back to the car I could tell he was a little icicle.. 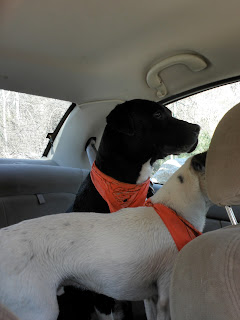 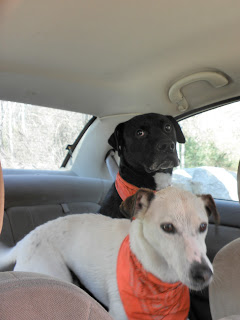 Hydro was so cold his little eyeballs were shaking.. we snuggled them and blasted the heat while we drove around for a bit… as you can see they were not feeling photogenic at this time..