I finished out the second week of LiveFit with Paula each morning at 6AM- before work. I’m getting more used to working out or more specifically lifting that early in the morning- and I must say that Paula was consistently asking me if I was going to the gym this week.. (Usually I’m the one getting her to go) I’m glad that she is getting into too! The Ipad is a great gym tool except when I forgot to charge it.. oops!
Since I’ve been going to the gym in the morning I’ve been practicing handstanding a bit less- though I’m definitely improving- which I’m thinking might be from the bit of rest from that handstand obsession I have. Haha :)
James has been working 10 hour days, meaning that he has been leaving at 5AM and getting home at 7PM (almost 4 hours of that is just the commute) However he was out early last night which was perfect so that we could go out for dinner, drinks and a stand up comedy show with our friends Scott and Laura. 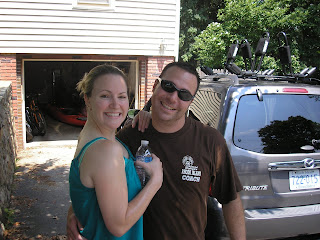 It was so much fun- and I had my first Cosmo, which was $12!! It was pretty good, and definitely strong. And right before the show ended Laura’s elbow bumped the glass and CRASH!!! It smashed all over the ground.. but the staff was nice and didn’t make a big deal out of it.. Maybe it was because the bill was huge which makes the tip equally large (we always over tip- since I believe its good Karma)
Scott and Laura dropped us off and we drove over to Erin’s house to let out her dog Bella before coming home and crashing.. It was a great night!
Posted by ZippyZu at 6:53 AM